The History of Minstrel Shows and Jim Crow

Course Overview:
This seminar explores the rise of Jim Crow in the United States and tracks it forward to its modern post-civil rights manifestations. Seminar participants  worked with a range of primary sources to interpret the shifting social, economic, political, psychological, and cultural trauma associated with this set of racial practices. Close attention will be paid to the effects of Jim Crow on both sides of the color line.

As part of the program, lesson plans were developed by the teachers who participated in the summer seminar.

Importance and Historical Context of the Topic
Images of black identity created by minstrel shows satirized blacks as singing, dancing, grinning fools. Actors/musicians blackened their faces with burnt cork and used other make-up material that demeaned African Americans for the pleasure of the viewing audience. It was the first example of the way American popular culture would exploit and manipulate blacks and their culture to entertain and benefit whites. Minstrels were portrayed as happy-go-lucky slaves who were too simple to accomplish anything but uncomplicated farm work.

Jim Crow is considered to be the first minstrel character, created by Thomas Dartmouth “Daddy” Rice in 1828. Rice was an unemployed actor who said he came upon a black man singing the song “Jump Jim Crow” and imitated that man’s mannerisms to construct what became known as the iconic Jim Crow. No one knows if the man was an old black slave who had difficulty walking or a tattered black stable boy, as different accounts of the meeting exist. Either way, Rice is widely known as the “Father of American Minstrelsy” as Jim Crow became a staple character in many shows, along with friends Jim Dandy and Zip Coon.

Within ten years of the character’s creation, the term Jim Crow was used as a negative nickname for African Americans, along the same lines as racial epithets coon or darkie. However, by the end of the 19th century Jim Crow was more likely to be used to describe the state laws which limited freedoms and rights blacks had gained as a result of the Civil war amendments during Reconstruction. There are many ways to characterize these laws since they limited and separated African Americans in virtually every aspect of society.

3.01 SWBAT… Trace the economic, social, and political events from the Mexican War to the outbreak of the Civil War.

3.04 SWBAT… Analyze the political, economic, and social impact of Reconstruction on the nation and identify the reasons why Reconstruction came to an end.

* How did the images of black identity created by minstrel shows affect both white and black audiences?
* How can we categorize specific Jim Crow laws and assess possible effects of those laws?

* Describe the images of African Americans. What stereotypes do you see?
* What do you think is being advertised?
* What can you assume about the product in the advertisement?
* Can you imagine this poster in today’s world? Explain your answer.

1. Who is his audience?
2. Describe the images you picture when you read the poem.
3. Explain the message you think Hughes hopes to convey.
4. Analyze what this poem tells you about the reactions of black people and white people to minstrel performers. Why might the reactions be different based on your race?
5. Why do you think Hughes wrote this poem?

3. Song: “Jump Jim Crow” by Thomas Dartmouth “Daddy” Rice
In cooperative learning groups, students will be given a handout of the lyrics to the song (with a picture of the character for them to see) and the directions below. The song will then play twice or three times. A recording of the song is available here: http://americanradioworks.publicradio.org/features/remembering/bitter.html

4. Short lecture and discussion about who Jim Crow was and what he represented will lead into an introduction to Jim Crow Laws.

5. Laws: Jim Crow Laws Throughout the South
In cooperative learning groups, students will receive a list of Jim Crow laws and follow the directions below. A list of sample laws can be found at: http://americanradioworks.publicradio.org/features/remembering/laws.html

1. Create at least four categories in which to place each law, based on the topics and themes you see on your list.
2. Place each law into a category on a graphic organizer that you create and be prepared to share that chart with your classmates. Remember, we are not simply compiling a list!

Summary
Questions for students (ticket out the door or homework)

1. Describe how minstrel shows and the images portrayed for entertainment evolved into Jim Crow Laws. Be sure to include the effects on both blacks and whites.
2. Choose one Jim Crow law and explain possible (or actual) consequences of that law.

1. Describe a situation where a stereotypical image of a race has been designed recently with another motive in mind.
2. Have you seen negative stereotypes created for entertainment cross over into politics recently? If so, where and what images have you noticed? Why do people create these images? 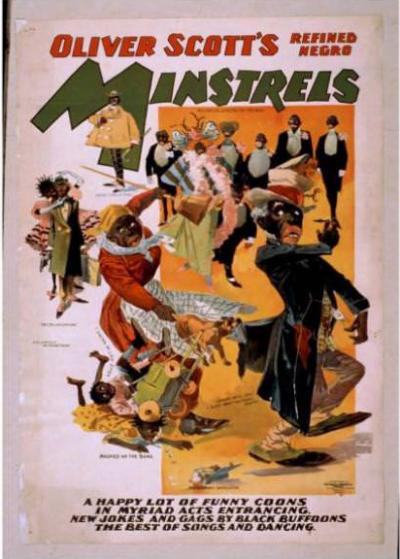 Minstrel Man by Langston Hughes (written in 1932)
Because my mouth
Is wide with laughter
And my throat
Is deep with song,
You do not think
I suffer after
I have held my pain
So long?

Because my mouth
Is wide with laughter,
You do not hear
My inner cry?
Because my feet
Are gay with dancing,
You do not know
I die? 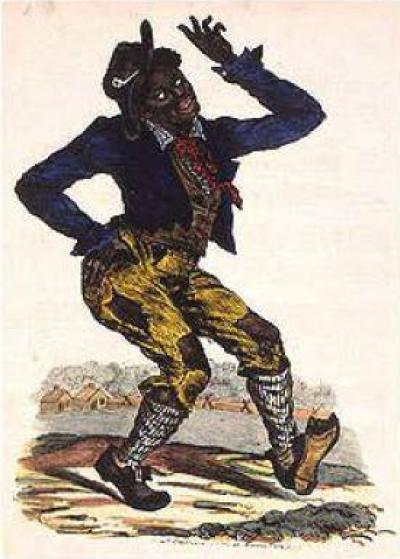 Jump Jim Crow by Thomas Dartmouth “Daddy” Rice (first performed in 1828)
Come, listen, all you gals and boys, I’m just from Tuckyhoe;
I’m gwine to sing a little song, My name’s Jim Crow.
Chorus: Wheel about, an’ turn about, an’ do jis so; Eb’ry time I wheel about, I jump Jim Crow
I went down to de river, I didn’t mean to stay,
But there I see so many gals, I couldn’t get away.
I’m rorer on de fiddle, an’ down in ole Virginny,
Dey say I play de sklentific, like massa Paganini.
I cut so many munky shines, I dance de gallopade;
An’ w’en I done, I res’ my head, on shubble, hoe or spade.
I met Miss Dina Scrub one day, I gib her such a buss;
An’ den she turn an’ slap my face, an’ make a mighty fuss.
De udder gals dey ‘gin to fight, I tel’d dem wait a bit;
I’d hab dem all, jis one by one, as I tourt fit.
I wip de lion ob de west, I eat de alligator;
I put more water in my mouf, den boil ten load ob ‘tator.
De way dey bake de hoe cake, Virginny nebber tire;
Dey put de doe upon de foot, an’ stick ‘em in de fire.