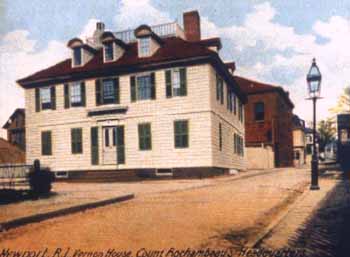 The Hare’s records show that the ship was owned by Samuel and William Vernon, wealthy merchants from Newport, Rhode Island.

The principal port in North America for ships engaged in the Atlantic slave trade, Newport sent over 900 voyages to Africa between 1725 and 1808 and exiled about 100,000 people to slavery in the West Indies and North America.

Rhode Island slave traders purchased Africans with rum manufactured in their own colony or in other neighboring colonies in New England. When they took their captives to the West Indies, they traded them for molasses which they shipped back to Rhode Island to make more rum for the Africa trade. When they sailed to South Carolina, they traded their slaves for rice which they took back to Newport in huge barrels.

Black community leaders in Rhode Island have recently begun to highlight their state’s history of involvement in the slave trade, but they have met some resistance. Most Americans associate slavery with the South alone, and for many the prominent role of a Northern state in the slave trade is something they prefer to sweep under the carpet.

Thus, when Rhode Island community leaders learned about the recent discoveries regarding Priscilla and the fact that she was taken to America on a Newport ship, they saw an opportunity to teach Rhode Island history through the story of a single person. They launched “Project Priscilla,” a grassroots effort to raise the funds to send Thomalind to Sierra Leone and then bring her up to Rhode Island after her return to the US to share her experiences of walking in her ancestor’s footsteps in Africa. Some black Rhode Islanders also hope to travel with Thomalind to Sierra Leone when she makes her homecoming visit in 2005. They will bring with them an imaginary portrait of Priscilla painted by a prominent black Rhode Island artist which they will present to the Sierra Leone National Museum. Priscilla’s Homecoming will, thus, link together three communities — Sierra Leone, South Carolina, and Rhode Island.