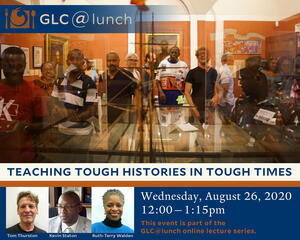 Since 2004, Tom Thurston has been at the helm of the Gilder Lehrman Center’s educational outreach efforts toward secondary school teachers and students. His work has ranged from leading international workshops connecting teachers from the U.S., Ghana, Sierra Leone, South Africa, and the U.K.; to organizing professional development workshops throughout the school year; to facilitating field trips for students in the New Haven metro area. Through these efforts, Tom has been the intellectual and creative engine for carrying into the classroom the GLC’s mission of fostering understanding of the impacts of the legacies of slavery AND resistance in the world today.

Thomas Thurston is the Director of Education for the Gilder Lehrman Center at the MacMillan Center at Yale University. He is the 2020 recipient of the Connecticut Council for the Social Studies Service Award, which recognizes an individual whose dedicated, continuous service furthers the goals of the CCSS. Tom is also the current President of the CT Coalition for History.

GLC@Lunch - In Studio with Dana King: Shaping the Legacy of William Lanson

Join Gilder Lehrman Center Director of Education Tom Thurston in conversation with sculptor Dana King Charles Warner Jr., chairman of the Connecticut Freedom Trail, and Kai Perry, Lead Educator for Discovering Amistad’s Social Justice Academy, Community Organizer, and a PhD candidate at the University of Connecticut. Perry, Thurston, and Warner are members of New Haven’s Amistad Committee. King is a classical figurative sculptor, based in Oakland, California and dedicated to creating public monuments of Black Bodies in Bronze. In collaboration with the New Haven City Planning Department, the Amistad Committee is preparing to unveil King’s seven-foot bronze statue of William Lanson, which will be held near the Yale Health Center, at 55 Lock St., New Haven. The dedication ceremony is scheduled for September 26, 2020.

During this symposium, U.S. teachers who have been working with South African and Sierra Leonean teachers, along with a selection of their students, will present classroom projects generated from the GLC Shared Histories Africa Institute. This program is sponsored by the Gilder Lehrman Center for the Study of Slavery, Resistance, and Abolition at the MacMillan Center at Yale University, with support from the Edward J. and Dorothy Clarke Kempf Memorial Fund.

Seth Mazibuko was a student organizer and leader of the 1976 Soweto Uprising, which lead to his arrest, conviction and sentencing to Robben Island for seven years. He continues to be involved in activism for social justice, most recently working with the South African Human Rights Committee, the June 16 Youth Development Foundation, and the Gauteng Housing Crisis Committee.

Dan Magaziner is a historian of 20th century Africa at Yale University and the Director of Undergraduate Studies for the Council for African Studies at the MacMillan Center. He is the author of two books: The Law and the Prophets: Black Consciousness in South Africa, 1968 – 1977 (2010) and The Art of Life in South Africa (2016).

Mary Abueng Khuduge is a teacher at Regents Park Primary School, in Johannesburg, South Africa. She studied at the University of the Witwatersrand in Johannesburg, where she received a Bachelor of Primary Education.

Teresa Willis, an educator in the Bronx, is the organizer of Middle Passages, a proposed community school for the Bronx.

Sven Glietenburg, formerly a teacher at the Thaba Jabula Secondary School in Soweto, is now studying for his Master’s degree at the University of Witwatersrand in Johannesburg.

Ibrahim Lamin is a teacher at at Beacon High School, in Freetown, and the author of Prime History of Sierra Leone for Senior Secondary School (2016). He was educated at the University of Sierra Leone, Fourah Bay College.

Kevin Staton is the librarian for the Fairfield School District two high schools, in Fairfield, Connecticut. He completed his studies at Howard University.

Panel 3: Youth Activism in the Classroom and Community
Saturday, October 3, 2020 • 9am EST

Seth Mazibuko and Tom Thurston interview student activists from Connecticut, and South Africa about issues and strategies for leading change in their schools and communities.

The Shared Histories Panel “Youth Activism in the Classroom and Community,” originally scheduled for Saturday, October 3rd, has been postponed. We will be rescheduling it for later in October. Please stay tuned.

The Yellow Demon of Fever: Fighting Disease in the Nineteenth-Century Transatlantic Slave Trade

As the slave trade brought Europeans, Africans, and Americans into contact, diseases were traded along with human lives. Manuel Barcia examines the battle waged against disease, where traders fought against loss of profits while enslaved Africans fought for survival. Although efforts to control disease and stop epidemics from spreading brought little success, the medical knowledge generated by people on both sides of the conflict contributed to momentous change in the medical cultures of the Atlantic world.

Author Edward L. Ayers in conversation with David Blight on his new book titled Southern Journey: The Migrations of the American South, 1790-2020

Southern Journey: The Migrations of the American South, by Edward Ayers, is a unique and stunning achievement of American and Southern history through mapping of geographic movement.  The South, as Ayers shows so vividly, was through the 19th and into the 20th centuries, America’s most distinct region. On the issues of race, economic change and struggle, human health, environment, transportation, and politics in all its forms this book illustrates beautifully how movements of people shaped this history.  Above all, Ayers has produced a cutting edge work of digital history aimed especially at teachers and classroom use. David Blight will conduct a wide-ranging conversation with Ayers about mapping specifically and interpretation more broadly of Southern and American history.

Through research, education, and civic engagement, the Witness Stones Project honors the humanity and contributions of enslaved individuals who helped build Connecticut communities. The project started in 2017 and was inspired by the memorialization of Jews in Berlin through the Stolpersteine Project. Since then, 11 schools and over 2,000 students have engaged in the Witness Stones curriculum, learning about the history of slavery in the North using five themes: dehumanization, treatment of the enslaved, paternalism, economics of slavery, and agency and resistance. Through inquiry-based learning, students examine primary sources such property, church, and vital records; wills and probate inventories; and census data, in order to understand the centrality of Africans and African Americans in colonial Connecticut.