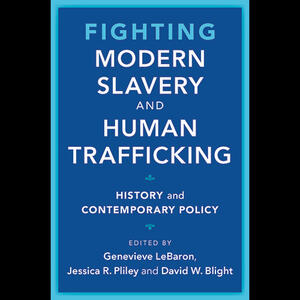 The Gilder Lehrman Center for the Study of Slavery, Resistance, and Abolition at the MacMillan Center at Yale University is pleased to announce the publication of Fighting Modern Slavery and Human Trafficking: History and Contemporary Policy by Cambridge University Press. The product of the Gilder Lehrman Center’s Modern Slavery Working Group, the book is edited by the Working Group co-chairs, Genevieve LeBaron (University of Sheffield) and Jessica R. Pliley (Texas State University, San Marcos), along with GLC Director David W. Blight (Sterling Professor of History at Yale).

Professor Blight contributed a preface and GLC Senior Fellow in Modern Slavery, Amb. Luis C.deBaca (ret.), wrote the afterword. This edited volume, notes Blight, “represents several years of gatherings, intensive seminars, and interdisciplinary writing by an international array of scholars devoted to understanding the world-wide struggle to end modern forms of forced labor. It is also the result of the intrepid intellectual labor of Genevieve LeBaron and Jessice Pliley.”

Over the last two decades, fighting modern slavery and human trafficking has become a cause célèbre. Yet a number of researchers, non-governmental organizations, trade unions, workers, and others who would seem like natural allies in the fight against modern slavery and trafficking are skeptical of these movements. They object to how the problems are framed and are skeptical of the “new abolitionist” movement. Academics who work on the issue often are divided in their approaches, and a canon has yet to emerge in this developing field.

And yet, victim service providers, public health officials, social workers, and law enforcement around the world are responding daily to the exigent needs of victims; workers are leading innovative responses; and survivors are taking their place in policy and advocacy leadership. Twenty years after the promulgation of the United Nations Anti-Trafficking Protocol, the field is ripe for assessment. As GLC Fellow Luis C.deBaca suggests, “from both an academic and policy perspective, if modern slavery is worth fighting, it is (like all important issues) also worth fighting about—and the energy of the Working Group is sharpening intellectual and applied knowledge around these modern forms of exploitation.”

The book includes essays by Working Group members and other leading scholars from a range of disciplines, including history, political science, sociology, and law. Spanning the 18th century to the contemporary world, the authors offer historical analysis and empirical evidence to analyze anti-slavery strategies and effectiveness, past and present. As feminist theorist and labor studies scholar Eileen Boris states, the book demonstrates that “research matters: whether in defining terms, estimating numbers, finding a usable past, or offering solutions to varieties of forced labor.”

Funded by the Robina Foundation, the Gilder Lehrman Center’s Modern Slavery Working Group comprised an international assemblage of thirteen scholars from multiple disciplines and countries. Over the course of four years, the group convened several times at Yale University to discuss transdiciplinary aspects of research on human trafficking and modern slavery that are key to its societal value, but rarely get discussed within existing networks focused on themes or topics. In November 2018, the Working Group organized a two-day conference at Yale: “Fighting Modern Slavery: What Works?” Videos of the panel presentations are available here: https://glc.yale.edu/events/conferences/2018-annual-conference/schedule

For more information about the Gilder Lehrman Center and its Modern Slavery initiatives, visit: https://glc.yale.edu/ModernSlavery