Familes Half Enslaved and Half Free 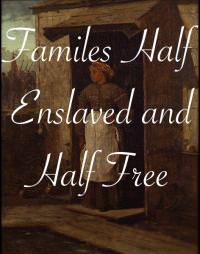 Two similar stories emerged from the greater New Orleans area in 1832 and 1833.  The first involved Marie Louise Bitaud, a free woman of color (likely formerly enslaved herself) who had worked to save enough money to purchase her daughter and grandson from the man enslaving them.  But because Bitaud had purchased them as property, the law still considered them property, and the she realized that if she were to die, her daughter and grandson would be taken as property and sold at auction. Therefore, she petitioned the local government to manumit her family to avoid such a fate, trying to convince a board of white men that an enslaved black woman and her boy deserved the freedom that Marie Louise Bitaud had intended. Accompanying Madame Bitaud’s plea was a petition signed by “freeholders residing in the City,” attesting to her daughter’s character and industry.

The second document concerns, Emilie, another New Orleans free woman of color, who had arranged to purchase and manumit her mother Louison from the man who held her in slavery. Although Louison’s owner had agreed to Emilie’s request, the transaction was complicated by the legal status of newly freed slaves in the Louisiana of the 1830s, where a recently passed law required that any newly freed slave was required to leave the state, legislation that severely complicated the lives of families such as Marie Louise and Emilie’s, half free and half enslaved.

As you read these documents, please consider the following: