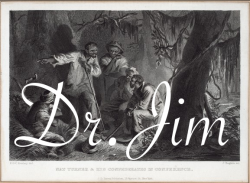 In 1818, Virginia planter and physician Dr. William Hare received two letters from a friend, Thomas Massie, concerning the legal proceedings surrounding two of Massie’s enslaved humans. In his first letter, Massie claimed that “one or two” of his enslaved individuals, Ned and Nanny, were caught with a “filthy substance in a phyal *,” which they said they had obtained from Doctor Jim, an enslaved shamanistic man on a neighboring plantation belonging to David Garland. In the second letter, Massie complains of Garland’s “illegal and improper” tactics at the inquisition, in which he attempted to prevent enslaved men and women from appearing as witnesses in order to maintain Doctor Jim’s innocence.

* A  “phyal” or “vial” is a small glass container made to hold liquids, especially medicine.