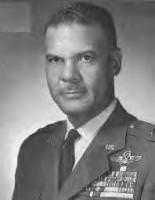 A group of Black men who were trained, under segregated conditions in Tuskegee, Alabama, as aviators starting in 1941 on the eve of World War II. Their distinguished record during this war was instrumental in Pres. Truman’s 1948 decision to end discrimination in the military. Col. Benjamin O. Davis (photo) led the group and in 1998, in retirement, was made a four star General by Pres. Clinton. Clinton called him, “a hero in war, a leader in peace, a pioneer for freedom…” Detroit is home to the National Tuskegee Airmen Museum.

Tuskegee Airmen on the Web:

Black History Pages
This site thoroughly treats the topic. It has links to a biography on Davis plus a history and photos of the group and their record during World War II.

Tuskekee Airmen — History
Begins with Truman’s Executive Order calling for “equality of treatment and opportunity” in the military. Gives a chronology of Tuskegee Airmen related events 1940-1971.

Books about The Tuskegee Airmen:

Nightfighters: The True Story of the Tuskegee Airmen (1994-VHS)