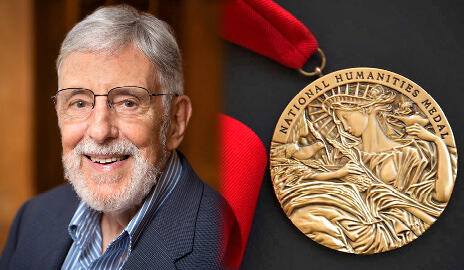 President Barack Obama presented the awards at a ceremony at the White House onJuly 28.

David Brion Davis “for reshaping our understanding of history. A World War II veteran, Davis has shed light on the contradiction of a free nation built by forced labor, and his examinations of slavery and abolitionism drive us to keep making moral progress in our time.” Davis is widely recognized as one of the foremost authorities on the history of slavery and abolitionism, as well as one of the most influential cultural and intellectual historians of his generation, as both a teacher of graduate students and as a writer and scholar. He was the founding director of the Gilder Lehrman Center for the Study of Slavery, Resistance, and Abolition, established at Yale in 1998.

Krista Tippett “for thoughtfully delving into the mysteries of human existence. On the air and in print, Tippett avoids easy answers, embracing complexity and inviting people of all faiths, no faith, and every background to join the conversation.” Tippet is the host and executive producer of the Peabody Award-winning radio show “On Being” and the author of “Speaking of Faith” and “Einstein’s God.”

Billie Tsien and Tod Williams “for their contributions to architecture and arts education. Whether public or private, their deliberate and inspired designs have a profound effect on the lives of those who interact with them, and their teaching and spirit of service have inspired young people to pursue their passions.“ Tod Williams Billie Tsien Architects have received the Arnold W. Brunner Memorial Prize from the American Academy of Arts and Letters, the Medal of Honor from the New York City chapter of the American Institute of Architects (AIA), and the Chrysler Design Award (1998). They were the recipients of the AIA 2013 Architecture Firm Award.

The National Humanities Medal honors individuals or groups “whose work has deepened the nation’s understanding of the humanities, broadened our citizens’ engagement with the humanities, or helped preserve and expand Americans’ access to important resources in the humanities.”

The National Medal of Arts is the highest award given to artists and arts patrons by the federal government. It is awarded to individuals or groups “who are deserving of special recognition by reason of their outstanding contributions to the excellence, growth, support, and availability of the arts in the United States.”

The National Endowment for the Arts (NEA) and the National Endowment for the Humanities (NEH) were established by Congress in 1965 as independent agencies of the federal government. To date, the NEA has awarded more than $5 billion to support artistic excellence, creativity, and innovation for the benefit of individuals and communities. The NEA extends its work through partnerships with state arts agencies, local leaders, other federal agencies, and the philanthropic sector.

The NEH supports research and learning in history, literature, philosophy, and other areas of the humanities by funding selected, peer-reviewed proposals from around the nation. The endowment brings high-quality historical and cultural experiences to large and diverse audiences in all 50 states, the District of Columbia, and five territories.