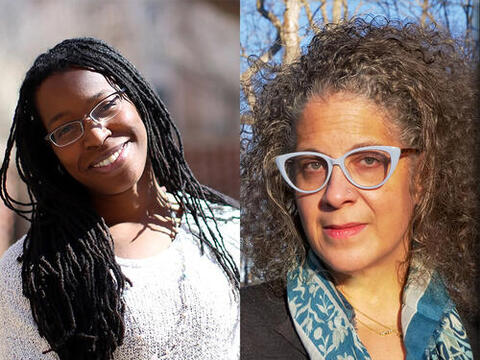 New Haven, Conn.— Yale University’s Gilder Lehrman Center for the Study of Slavery, Resistance, and Abolition today has announced the winners for the twenty-fourth annual Frederick Douglass Book Prize, one of the most coveted awards for the study of the slavery in world history. The 2022 Prize will be shared by two scholars. The co-winners are: Tiya Miles for “All That She Carried: The Journey of Ashley’s Sack, a Black Family Keepsake” (Random House) and Jennifer L. Morgan for “Reckoning with Slavery: Gender, Kinship, and Capitalism in the Early Black Atlantic” (Duke University Press). Both of the winning books, noted Gilder Lehrman Center Director David Blight, use different scholarly approaches to examine “the complications and persistence of kinship within the commercial and social history of slavery in the Atlantic World.”

The Gilder Lehrman Institute and Gilder Lehrman Center are pleased to celebrate these books as outstanding examples of scholarship and writing about slavery and its ongoing legacies. “All That She Carried,” Gilder Lehrman Institute President James Basker noted, is a “terribly important book that helps teachers, students, and the public at large care about history.” Review committee member Edward Rugemer, Associate Professor of History and of African American Studies at Yale, observed that “Reckoning with Slavery” is a book that “makes powerful arguments and will be read and debated for a very long time.”

In addition to Miles and Morgan, the third finalist for the prize was Alexis Wells-Oghoghomeh for “The Souls of Womenfolk: The Religious Cultures of Enslaved Women in the Lower South” (University of North Carolina Press). Combining exemplary historical research and analysis, all three finalists put gender and the experiences of enslaved Black women, children, and families at the center of their work. 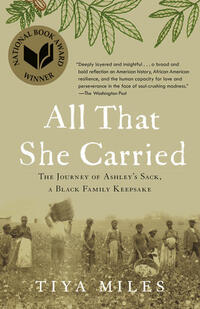 In “All That She Carried,” Tiya Miles focuses on a tangible piece of material culture—a cotton sack given by an enslaved mother to her daughter—to remind readers that everyday objects readily dismissed as mundane brim with spirit and significance. Through marvelous writing built on creative archival research, Miles offers a moving account of what this sack meant to the women who made, received, and treasured it through generations. Narrating the story of the discovery and preservation of this object, Miles explores the symbolic values of the sack and its contents not just to the circle of women to whom it belonged but to all of us and American history at large. Crafted with original scholarship and poignant prose, the book engages the deep history of slavery in the United States alongside the nourishing power of love in an inhumane and unloving world. 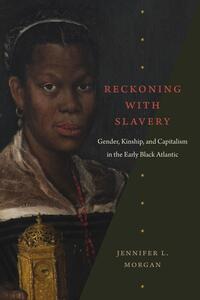 Jennifer L. Morgan’s “Reckoning with Slavery” builds on decades of archival research. Inspired by a generation of Black Feminist writing, Morgan has written an “instant classic,” in the words of jury member Sasha Turner. Placing women and reproduction at the center of what David Brion Davis called the “heart of slavery,” Morgan examines how racial slavery became a core part of capitalism and Western Culture. Through a careful reading of early books on travels to Africa and the Americas, on slavery, and on women, Morgan writes that in the English-speaking world of the 1600s, the ideas of “race” and the “economic practice” of slavery developed during the same period of time, before the creation of colonies. A rich, interdisciplinary study of the early modern Atlantic world, “Reckoning with Slavery” will be essential reading in the fields of demography, economics, and women’s studies as well as history.

The Frederick Douglass Book Prize was established by the Gilder Lehrman Institute of American History and Gilder Lehrman Center in 1999 to stimulate scholarship in the field by honoring outstanding accomplishments. The award is named for Frederick Douglass (1818–1895), the one-time slave who escaped bondage to emerge as one of the great American abolitionists, reformers, writers, and orators of the nineteenth century.

The Gilder Lehrman Center for the Study of Slavery, Resistance, and Abolition is part of the Whitney and Betty MacMillan Center for International and Area Studies at Yale University. The Center was launched in November 1998 through generous contributions from philanthropists Richard Gilder and Lewis Lehrman. The Center creates and disseminates knowledge about the role of slavery and the struggle against it in the functioning of the modern world. To increase understanding of the global history and legacies of slavery, and enduring efforts to overcome injustice, the Center promotes interaction and exchange between scholars, teachers, students, and public historians through publications, educational outreach, and free public programs and events. For further information on events and programming, and to find out how you can support the continuing work of the GLC, visit https://glc.yale.edu/ or contact the Center by phone at (203) 432-3339 or e-mail gilder.lehrman.center@yale.edu.

The Gilder Lehrman Institute of American History was founded in 1994 by Richard Gilder and Lewis E. Lehrman, visionaries and lifelong supporters of American history education. The Institute is the leading nonprofit organization dedicated to K–12 history education while also serving the general public. Its mission is to promote the knowledge and understanding of American history through educational programs and resources. As a 501(c)(3) nonprofit public charity the Gilder Lehrman Institute of American History is supported through the generosity ofindividuals, corporations, and foundations. The Institute’s programs have been recognized by awards from the White House, the National Endowment for the Humanities, the Organization of American Historians, and the Council of Independent Colleges. For further information, visit gilderlehrman.org or call (646) 366-9666.