Trump has birthed a dangerous new ‘Lost Cause’ myth. We must fight it 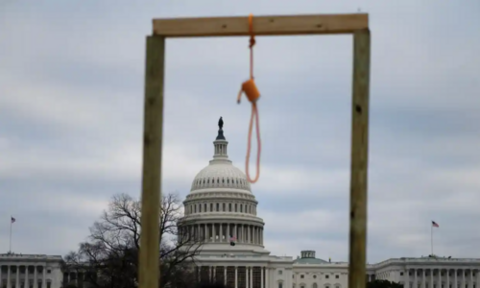 The lie that the election was ‘stolen’ from Trump is building its monuments in ludicrous stories, and codifying them in laws to make the next elections easier to pilfer.

By David Blight, Director of the Glider Lehrman Center for the Study of Slavery, Resistance, and Abolition

American democracy is in peril and nearly everyone paying attention is trying to find the best way to say so. Should we in the intellectual classes position our warnings in satire, in jeremiads, in social scientific data, in historical analogy, in philosophical wisdom we glean from so many who have instructed us about the violence and authoritarianism of the 20th century? Or should we just scream after our holiday naps?

Some of us pick up our pens and do what we can. We quote wise scribes such as George Orwell on how there may be a latent fascist waiting to emerge in all humans, or Hannah Arendt on how democracies are inherently unstable and susceptible to ruin by aggressive, skilled demagogues. We turn to Alexis de Tocqueville for his stunning insights into American individualism while we love to believe his claims that democracy would create greater equality. And oh! how we love Walt Whitman’s fabulously open, infinite democratic spirit. We inhale Whitman’s verses and are captured by the hypnotic power of democracy. “O Democracy, for you, for you I am trilling these songs,” wrote our most exuberant democrat.

Read enough of the right Whitman and you can believe again that American democracy may yet be “the continent indissoluble … with the life-long love of comrades”. But just now we cannot rely on the genius alone of our wise forbears. We have to face our own mess, engage the fight before us, and prepare for the worst.

Our democracy allows a twice-impeached, criminally inclined ex-president, who publicly fomented an attempted coup against his own government, and still operates as a gangster leader of his political party, to peacefully reside in our midst while under investigation for his misdeeds. We believe in rule of law, and therefore await verdicts of our judicial system and legislative inquiry.

Yet Trumpism unleashed on 6 January, and every day before and since over a five-year period, a crusade to slowly poison the American democratic experiment with a movement to overturn decades of pluralism, increased racial and gender equality, and scientific knowledge. To what end? Establishing a hopeless white utopia for the rich and the aggrieved.

On this 6 January anniversary is it time to sing anew with Whitmanesque fervor, or is the only rational response to scream? First the scream.

On 6 January 2021, an American mob, orchestrated by the most powerful man in the land, along with many congressional and media allies, nearly destroyed our indirect electoral democracy. To this day, only Trump’s laziness and incompetence may explain why he did not force Vice-President Mike Pence to resign in the two months before the coup attempt, install a genuine lackey like Mark Meadows, and set up the formal disruption of the count of electoral votes. The real coup needed guns, and military brass thankfully made clear they would oppose any attempt at imposing martial law. But the coup endures by failing; it now takes the form of voter suppression laws, virulent states’ rights doctrine applied to all manner of legislative action installing Republican loyalists in the electoral system, and a propaganda machine capable of popularizing lies big and small.

The lies have now crept into a Trumpian Lost Cause ideology, building its monuments in ludicrous stories that millions believe, and codifying them in laws to make the next elections easier to pilfer. If you repeat the terms “voter fraud” and “election integrity” enough times on the right networks you have a movement. And “replacement theory” works well alongside a thousand repetitions of “critical race theory”, both disembodied of definition or meaning, but both scary. Liberals sometimes invite scorn with their devotion to diversity training and insistence on fighting over words rather than genuine inequality. But it is time to see the real enemy – a long-brewing American-style neo-fascist authoritarianism, beguilingly useful to the grievances of the disaffected, and threatening to steal our microphones midway through our odes to joy.

Yes, disinformation has to be fought with good information. But it must also be fought with fierce politics, with organization, and if necessary with bodies, non-violently. We have an increasingly dangerous population on the right. Who do you know who really wants to compromise with their ideas? Who on the left will volunteer to be part of a delegation to go discuss the fate of democracy with Mitch McConnell, Kevin McCarthy or the foghorns of Fox News? Who on the right will come to a symposium with 10 of the finest writers on democracy, its history and its philosophy, and help create a blueprint for American renewal? As a culture we are not in the mood for such reason and comity; we are in a fight, and it needs to happen in politics. Otherwise it may be 1861 again in some very new form. Unfortunately it is likely to take events even more shocking than 6 January to move our political culture through and beyond our current crisis.

And if and when it is 1861 again, the new secessionists, namely the Republican party, will have a dysfunctional constitution to exploit. The ridiculously undemocratic US Senate, now 50/50 between the two parties, but where Democrats represent 56.5% of the population and Republicans 43.5%, augurs well for those determined to thwart majoritarian democracy. And, of course, the electoral college – an institution more than two centuries out of date, and which even our first demagogue president, Andrew Jackson, advocated abolishing – offers perennial hope to Republicans who may continue to lose popular votes but win the presidency, as they have in two of the last six elections. Democracy?

And now the song? Well, keep reading. Of all the books on democracy in recent years one of the best is James Miller’s Can Democracy Work? A Short History of a Radical Idea, from Ancient Athens to Our World. A political philosopher and historian, Miller provides an intelligent journey through the turbulent past of this great human experiment in whether people can actually govern themselves. He demonstrates how thin the lines are between success and disaster for democracies, how big wins turn into reactions and big losses, and how the dynamics of even democratic societies can be utterly amoral. Intolerant new ruling classes sometimes replace the tyrants they overthrow.

“Democratic revolts, like democratic elections,” Miller writes, “can produce perverse outcomes.” History is still waiting for us. But in the end, via examples like Václav Havel in the Czech Republic, Miller reminds us that the “ideal survives”. Democracy does require the “best laws”, Havel intoned, but it must also manifest as “humane, moral, intellectual and spiritual, and cultural”. Miller does the history to show that democracy is almost always a “riddle, not a recipe”. Democracy is much harder than autocracy to sustain. But renew it we must.

Or simply pick up Whitman’s Song of Myself, all 51 pages, from the opening line, “I celebrate myself, and sing myself,” to his musings on the luck of merely being alive. Keep going to a few pages later when a “runaway slave” enters Whitman’s home and the poet gazes into his “revolving eyes”, and nurses “the galls of his neck and ankles”, and then to his embrace of “primeval”, complete democracy midway in the song, where he accepts “nothing which all cannot have”. Finally read to the ending, where the poet finds blissful oblivion, bequeathing himself “to the dirt to grow from the grass I love”. Whitman’s “sign of democracy” is everywhere and in everything. The democratic and the authoritarian instinct are both deep within us, forever at war.

After 6 January, it’s time to prepare thee to sing, to scream, and to fight.