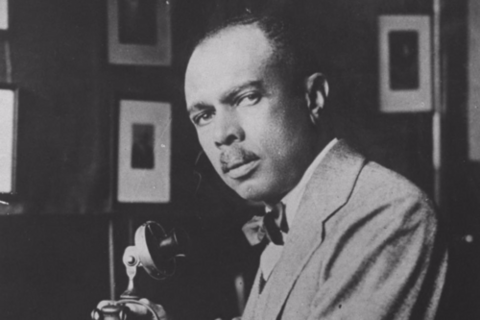 African American cultural memory of slavery, emancipation and the Civil War reached an important apex on January 1, 1913, when James Weldon Johnson, musical lyricist, novelist, diplomat, essayist, lawyer and poet, published “Fifty Years” on page one of the New York Times to commemorate the fiftieth anniversary of black freedom. Reprinted in black newspapers, and delivered as a reading at numerous emancipation celebrations to follow, Johnson’s poem is a sublime statement of African American birthright. As though banishing any shame associated with the slavery experience from memorial consciousness, and transcending the Lost Cause and white supremacy that seemed so dominant in the broad American culture at the time, Johnson found a higher plane of tragic but genuine patriotism. Seven verses into the poem he struck his central theme:

Then let us here erect a stone,
To mark the place, to mark the time;
A witness to God’s mercies shown,
A pledge to hold this day sublime.

As our culture now rediscovers “Juneteenth,” and it has the prospect of being designated a national holiday, it is worth recognizing the many other markers on the path to this historical moment. Johnson claimed the center of American historical memory by right of birth, labor, and blood. Emancipation in the 1860s is the pivot of American history, and few ever captured its meaning more lyrically than Johnson in these majestic verses.

O brothers mine, to-day we stand
Where half a century sweeps our ken,
Since God, through Lincoln’s ready hand,
Struck off our bonds and made us men.

Just fifty years — a winter’s day—
As runs the history of a race;
Yet, as we look back o’er the way,
How distant seems our starting place!

Look farther back! Three centuries!
To where a naked, shivering score,
Snatched from their haunts across the seas,
Stood, wild-eyed, on Virginia’s shore.

Far, far the way that we have trod,
From heathen kraals and jungle dens,
To freedmen, freemen, sons of God,
Americans and Citizens.

A part of His unknown design,
We’ve lived within a mighty age;
And we have helped to write a line
On history’s most wondrous page.

Then let us here erect a stone,
To mark the place, to mark the time;
A witness to God’s mercies shown,
A pledge to hold this day sublime.

And let that stone an altar be,
Whereon thanksgivings we may lay,
Where we, in deep humility,
For faith and strength renewed may pray.

With open hearts ask from above
New zeal, new courage and new pow’rs,
That we may grow more worthy of
This country and this land of ours.

For never let the thought arise
That we are here on sufferance bare;
Outcasts, asylumed ‘neath these skies,
And aliens without part or share.

Where once the tangled forest stood, —
Where flourished once rank weed and thorn, —
Behold the path-traced, peaceful wood,
The cotton white, the yellow corn.

That Banner which is now the type
Of victory on field and flood —
Remember, its first crimson stripe
Was dyed by Attucks’ willing blood.

And never yet has come the cry—
When that fair flag has been assailed—
For men to do, for men to die,
That have we faltered or have failed.

We’ve helped to bear it, rent and torn,
Through many a hot-breath’d battle breeze;
Held in our hands, it has been borne
And planted far across the seas.

And never yet—O haughty Land,
Let us, at least, for this be praised —
Has one black, treason-guided hand
Ever against that flag been raised.

Then should we speak but servile words,
Or shall we hang our heads in shame?
Stand back of new-come foreign hordes,
And fear our heritage to claim?

No! stand erect and without fear,
And for our foes let this suffice —
We’ve bought a rightful sonship here,
And we have more than paid the price.

And yet, my brothers, well I know
The tethered feet, the pinioned wings,
The spirit bowed beneath the blow,
The heart grown faint from wounds and stings;

The staggering force of brutish might,
That strikes and leaves us stunned and dazed;
The long, vain waiting through the night
To hear some voice for justice raised.

Full well I know the hour when hope
Sinks dead, and ‘round us everywhere
Hangs stifling darkness, and we grope
With hands uplifted in despair.

Courage! Look out, beyond, and see
The far horizon’s beckoning span!
Faith in your God-known destiny!
We are a part of some great plan.

Because the tongues of Garrison
And Phillips now are cold in death,
Think you their work can be undone?
Or quenched the fires lit by their breath?

Think you that John Brown’s spirit stops?
That Lovejoy was but idly slain?
Or do you think those precious drops
From Lincoln’s heart were shed in vain?

That for which millions prayed and sighed,
That for which tens of thousands fought,
For which so many freely died,
God cannot let it come to naught.