GLC Student Column: “Change does not roll in on the wheels of inevitability, but comes through continuous struggle”: Reflections on MLK Day 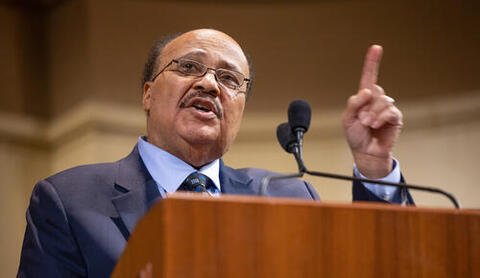 Woolsey Hall was packed with a diverse array of bright faces on Wednesday, January 18, 2023, but the gathering was not a celebration. This message was relayed to the 2,500 people in the audience by Martin Luther King III, the son of arguably the biggest leader and icon of the Civil Rights Movement, when he said that he could not celebrate the life and legacy of his father because oppression still exists; another year has passed and the famous dream of Dr. King has not yet been realized.

In his commemoration speech, Mr. King identified the three primary evils which plague our society today: poverty, violence, and racism. Dr. King spent his career as an activist fighting against these exact same evils, demonstrating the ability of these elusive, snake-like concepts to maneuver past the efforts of even the most impassioned advocates and rear its ugly head in the most blatant and cruel ways. In relation to poverty, Mr. King referenced the ever-increasing gargantuan of CEO compensation, which often surpasses the billion-dollar mark, and contrasted it to the measly $7.25 that the federal government determined is the lowest someone should be paid after toiling for an hour, a wage that cannot sustain a life in present-day America. Mr. King also noted the severe decline in unions and union membership, a trend that can be attributed to the companies who have spent significant time, effort, and money to break up any unions or attempts to unionize. Mr. King argued that the reversal of this trend would be necessary in securing jobs for working-class people with favorable conditions and livable wages. Dr. King’s assessment in 1963 that “God never intended for one group of people to live in superfluous inordinate wealth, while others live in abject deadening poverty” is a poignant reflection that our society has only grown further from the intentions of a God who desires justice.

In addition to poverty, Mr. King asserted that violence and racism are the other two pressing evils that permeate our culture. Although he is not opposed to the right of Americans to own guns, he wondered aloud to the crowd of people who are bombarded by daily news stories of mass shootings everywhere, including in schools, why anyone would want to own a weapon that can fire off shot after shot after shot, uninterrupted by the need to reload. Such a weapon would be useless for those who argue that they hunt for sport, Mr. King joked, as a device whose use can be for nothing other than killing at a maximally efficient rate would make it unfair for the animal. Not only do civilians have access to these killing machines, but police officers as well; the same police departments who have been brutalizing black people since they originated from slave patrols. This is not the only way racism continues to manifest today- despite the success of the Civil Rights Movement to secure equality for all on paper through the Civil Rights Act and Voting Rights Act, voter suppression laws have been continually introduced and passed at all levels of government, specifically targeting black communities. The efficacy of these laws in suppressing the black vote is dwarfed by the disproportionate incarceration of the black community and felon disenfranchisement, which Mr. King expresses vehement opposition to.

Although Mr. King painted an accurate portrait of the dismal, crisis-ridden state of society, he is optimistic in our collective fight for a better future. He posited that it is entirely possible to address these three evils, along with the myriad of problems which come alongside and stem from them, including the refugee crisis, climate change, lack of access to fresh water, the cost of college, healthcare, and income inequality. Mr. King is a realist in his optimism, however, pointing out that we can only ever commemorate his dad’s memory and not celebrate while these issues are unaddressed.

And so, the remaining question is a question of action. How do we go about addressing these issues? According to Mr. King, the answer lies in political mobilization, especially amongst the youth. He stressed the necessity of encouraging people to use the power of the ballot to improve their conditions. He underlined the importance of civic engagement, hopefully leading to a new, young, visionary leadership inside government with more women present in that leadership. He discussed the significance of nonviolent campaigns with the buy-in of young people. He asserted how crucial it is to revitalize the American labor movement, and urged students to get involved with movements that help the poor, oppressed, and downtrodden. Mr. King’s sentiments are echoed by the voice of his father, “Change does not roll in on the wheels of inevitability, but comes through continuous struggle.”

Mr. King’s identification of the evils which plague our society is undoubtedly sound. But, as he mentioned and as was clear to the people listening attentively in the audience, these problems have existed for a long time. Not only that, but these problems are perhaps more interconnected than they seem. Violent crime is concentrated in impoverished areas, and it is not difficult to understand why; when jobs are not obligated to pay their employees enough to buy groceries, the employees need to obtain the money to do it somehow to avoid starvation. Violence is inextricably linked to poverty, and so is racism. It has been a tactic since the Fordist era to hire black people in jobs where the employees are planning to unionize, because the racist attitudes and the desire to feel superior to their black counterparts triumphed over their desire to unite and obtain better wages. These few small examples are ample proof for the intertwined nature of poverty, violence and racism, and the constant that remains between all three is a market-based economic system that prioritizes profits above all else, allowing wealth to concentrate in the hands of fewer and fewer people. With that said, it is hard to maintain the same level of optimism as Mr. King when the suggested channels of activism are limited to struggling for political reform. How powerful was the ballot to the 63% of Americans who shared Mr. King’s vision of universal healthcare in the 2020 election, when neither candidate supported the policy? How powerful is the ballot to the millions of black men who were incarcerated due to unfair drug policies that were pioneered by the current president, when their other choice was a blatant racist?

Our “democracy” has only demonstrated that it works in favor of a wealthy few who profit from the way society is currently structured, and the vast majority of the people in Woolsey Hall that night were not a part of that few. If we are proceeding from the assertion that our “democracy” is fundamentally broken, then how can changes be made through this channel? Should we, the 99% of people who sat in Woolsey Hall who own nothing that creates wealth other than our own labor, continue to use Mr. King’s methods of reformism and electoralism to compromise with the ruling class, the class who profits from the labor and oppression of those who are impoverished and downtrodden, or should measures be taken into our own hands? Mr. King was right in his claim that change requires the creation of campaigns under the leadership of a new, visionary youth with a revitalized labor movement, but change still needs more. These new movements must have the goal of liberating the poor and oppressed from our current exploitative economic system, and replace it with one that is fair and just. It is paramount to recognize that in an exploited economic system, the ones with the true power are the exploited. The system cannot function without their daily, constant, participation. Thus, these new movements must team up with unions and communities to organize strikes, protests, rallies to make demands backed by leverage, not ask for reforms. Perhaps it is time to stop asking how our collective unity and action can mend our political system and start asking if it is worth our time to mend it in the first place. Should a broken system be fixed or dismantled?

Sebastian Ward, a New Haven native and currently a first-year at Yale University, has spent the bulk of his high school career engaging in community organizing efforts in New Haven. Sebastian was a student at New Haven Reads (NHR), a non-profit dedicated to providing tutoring and instruction to students in the Greater New Haven Area who struggle to read, and later became a tutor when he turned 16. Sebastian is now an intern at NHR and currently serves on their board. Sebastian was also a member, organizer, and eventually a board member for the New Haven-based non-profit, Students for Educational Justice (SEJ), a youth-led, intergenerational organizing body that drives efforts for racial and educational justice. Sebastian learned about the Gilder Lehrman Institute of American History through SEJ, and later interned in their New York office during his gap year, along with the Connecticut Secretary of State Denise Merrill and the Ron Brown Scholar Program. He has also spent time as a counselor at Leadership, Education, and Athletics in Partnership. Along with studying history, Sebastian is continuing to intern at NHR and is a student worker at the Gilder Lehrman Center for the Study of Slavery, Resistance, and Abolition at the MacMillan Center at Yale. He is also a member of the New Haven branch of the International Marxist Tendency.