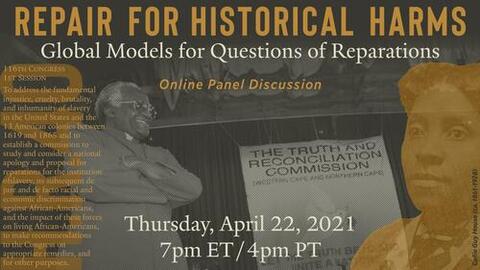 In the past half century, a dozen or more nations, as well as numerous international organizations, companies, and universities, have considered or enacted programs of reparation for past wrongs, including for slavery in the Americas. Sometimes redress has been sought through juridical means, other times by material or financial repair, and still other approaches have been symbolic. In some contexts, individual victims have been compensated for proven harm in the past. Other contexts involving massive historical harm done over long periods of time have prompted widely varying approaches to redress. All efforts seek justice in a legal, moral, or political sense, and justice has widely differing definitions across time and cultures. This panel will address these issues historically and in our contemporary world, with attention to the issue of reparations to Black Americans.