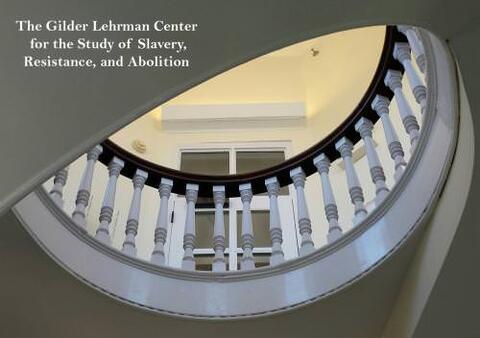 Welcome back! See below this week’s GLC e-newsletter. For more information about our events, programs, and resources, please also visit our website at glc.yale.edu and follow us on Facebook. Feel free to pass this information along to friends and colleagues.

“Calhoun College: What’s in a Name? A Conversation with David Blight”

“Beyond the Slave Narrative: 18th Century Voices of the African Diaspora”

Drawing on courtroom testimony by enslaved Africans in colonial Louisiana, this talk argues that far from seeing testimony as exclusively antagonistic, the enslaved seem to have seized the opportunity to testify. In doing so, they produced an extraordinary corpus of autobiographical narratives as they sought to voice their experiences of slavery and diaspora.

“Film: Ghosts of the Amistad”

A documentary based on Rediker’s, The Amistad Rebellion
Co-sponsored by:
The Amistad Committee, Inc.
Gilder Lehrman Center for the Study of Slavery, Resistance and Abolition
New Haven Museum
Refreshments ~ Public is invited

The tragic murders of nine African American people in the Emanuel AME Church in Charleston, SC sparked outrage and the eventual removal of the Confederate flag from statehouse grounds in South Carolina. Three months later, this distinguished panel reflects on the murders, the push to remove symbols of the Confederacy and racism across the South and the nation, and what has and hasn’t changed since June.

(Rensselaer, NY) – On Saturday September 12 from 11:00am-4:00 pm Crailo State Historic Site will open its new exhibit A Dishonorable Trade: Human Trafficking in the Dutch Atlantic World during Harvest Faire.

The exhibit is the result of a two year collaboration between Crailo, the Gilder Lehrman Center and the Yale Public History Institute. Divided in to two parts, the exhibit examines the role that slavery played in the creation and maintenance of the Dutch trading empire and then delves into the lives and stories of the people affected by the trade.  The exhibit will be up through October of 2016.

Once the Van Rensselaer family’s fortified home, Crailo State Historic Site is the museum of the colonial Dutch in the Hudson River Valley. For information on this season’s special events, programs, exhibits and this year’s Saratoga-Capital District Regional Geocache Challenge please find Crailo on the New York State Parks website at www.nysparks.com or on Facebook at www.facebook.com/CrailoStateHistoricSite or by calling (518)463-8738.

The New York State Office of Parks, Recreation and Historic Preservation oversees 180 state parks and 35 historic sites, which are visited by 60 million people annually. For more information on any of these recreation areas, call 518-474-0456 or visit www.nysparks.com, connect on Facebook, or follow on Twitter.

The Journal of Global Slavery (JGS) aims to advance and promote a greater understanding of slavery and post-slavery from comparative, transregional, and/or global perspectives. It especially underscores the global and globalizing nature of slavery in world history.

As a practice in which human beings were held captive for an indefinite period of time, coerced into extremely dependent and exploitative power relationships, denied rights (including potentially rights over their labor, lives, and bodies), could be bought and sold, were vulnerable to forced relocation by various means, and forced to labor against their will, slavery in one form or another has existed in innumerable societies throughout history. JGS fosters a global view of slavery by integrating the latest scholarship from around the world and providing an interdisciplinary platform for scholars working on slavery in regions as diverse as ancient Rome, Pre-Colombian Mexico, Han dynasty China, the Ottoman Empire, the antebellum United States, and twenty-first-century Mali.

The journal also promotes a view of slavery as a globalizing force in the development of world civilizations. Global history focuses heavily upon the global movement of people, goods, and ideas, with a particular emphasis on processes of integration and divergence in the human experience. Slavery straddles all of these focal points, as it connected and integrated various societies through economic and power-based relationships, and simultaneously divided societies by class, race, ethnicity, and cultural group.

JGS is a peer-reviewed journal that publishes articles based on original research, book reviews, short notes and communications, and special issues. It especially invites articles and special issues that situate studies of slavery (whether historical or modern-day forms) in explicitly comparative, transregional, and/or global contexts.

Essays (between 8,000-10,000 words) should be written in American English, and conform to The Chicago Manual of Style (15th Edition). Authors should provide an abstract of approximately 150 words and 5-8 key words. Detailed submission instructions can be found here: www.brill.com/products/journal/journal-global-slavery

Articles for consideration can be submitted online via Editorial Manager, found here: www.editorialmanager.com/jgsbrill

For further information about how to submit articles, please contact

Check out our new website with information about all of our conferences, events and fellowships.

Gilder Lehrman Center for the Study of