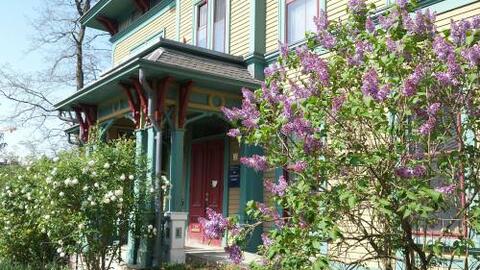 In 1846 John Andrew Jackson escaped from an inland South Carolina plantation and, with courage and luck, made his way to Massachusetts. On his way to Canada he hid with the then obscure magazine writer and Bowdoin faculty wife, Harriet Beecher Stowe, just a few weeks before she began Uncle Tom’s Cabin.  Eventually he toured England and Scotland and lectured on abolition, returning to the U. S. after the war. He settled first in Springfield, Massachusetts and then in New Haven, CT to work as a laborer during the day but at night as a tireless philanthropist, lecturer, and advocate for the destitute South Carolina freedmen.

His narrative of 1862 is little-known, as is the complex life he had for the decades afterwards when he sought to bring the broken parts of the Union together. Dr. Ashton’s research on Jackson’s life begins as a portrait of a man but is also about the archive of the marginal, the folklore of the underground, and the forgotten networks that make up how we see our histories and our communities. This talk is part of the GLC Brown Bag Lunch Series. Bring your lunch and we’ll provide the drinks & dessert.

“No One was More Faithful: George W. Taylor, Quakerism, and Reform in the Nineteenth Century”

For Philadelphia Quaker George W. Taylor activism in causes such as abolitionism, free produce, temperance, and peace was an expression of his Quaker faith. While Taylor’s free produce activism has received scholarly attention, much of the rest of Taylor’s life and reform work has not. As a result, Taylor appears to be a man of a single idea who arrives rather abruptly in the 1840s just as the free produce movement is losing ground with most abolitionists. My project focuses on the breadth and depth of Taylor’s public and personal life, placing Taylor’s free produce activism within the larger context of his close-knit family, his deep religious views, and his other reform work. Such a focus will highlight the diversity of Friends and their relationship to antebellum reform movements such as abolitionism. This talk is part of the GLC Brown Bag Lunch Series. Bring your lunch and we’ll provide the drinks & dessert.

The Library Company of Philadelphia’s Program in African American History (PAAH), with the support of the Andrew W. Mellon Foundation, offers the following Mellon Scholars long-term fellowships for 2016-2017.

These fellowships aim to promote research in the collections of the Library Company and to enhance the production of scholarly work in African American history of the 17th, 18th, and 19th centuries.

For application guidelines and more information, please view the ad at http://www.h-net.org/jobs/job_display.php?id=51648

The Lapidus Center for the Historical Analysis of Transatlantic Slavery of the Schomburg Center for Research in Black Culture, The New York Public Library, offers two long-term fellowships to assist scholars whose research on transatlantic slavery can benefit from extended access to the Schomburg Center’s resources.  Fellows will begin residence at the Center on September 1, 2016 and end on March 1, 2017. They will receive a $30,000 stipend. Deadline:  December 1, 2015.

The Lapidus Center also offers five short-term fellowships. The Fellowship Program is open to doctoral students, post-doctoral scholars, independent researchers, and artists studying the slave trade, slavery, abolition, and anti-slavery in the Atlantic World. Fellowships are awarded for continuous periods of three months at the Schomburg Center with a stipend of $6,000. Deadline: December 1, 2015.

The John Carter Brown Library (JCB), an independently funded institution for advanced research on the campus of Brown University, will award approximately forty residential fellowships for the year July 1, 2016 to June 30, 2017. The Library contains one of the world’s premier collections of primary materials related to the discovery, exploration, and settlement of the New World to 1825, including books, maps, newspapers, and other printed objects. JCB Fellowships are open to scholars and writers working on all aspects of the Americas in the early modern period.

Short-term Fellowships are for two to four months with a monthly stipend of $2,100. Open to US and foreign citizens who are engaged in pre- or post-doctoral or independent research. Graduate students must have passed their preliminary or general examinations at the time of application.

Long-Term Fellowships are for five to ten months with a monthly stipend of $4,200. These include two to four NEH Fellowships, for which an applicant must be a US citizen or have lived in the US for the three years preceding the application deadline, and other long-term JCB awards for which all nationalities are eligible. Graduate students are not eligible for long-term JCB Fellowships.

Recipients of all fellowships must relocate to Providence and be in continuous residence at the JCB for the full term of the award. Rooms are available for rent at Fiering House, the JCB’s Fellows’ residence, a beautifully restored 1869 house just four blocks from the Library.

The deadline for short- and long-term fellowships is December 1, 2015.

For more information - including information about Thematic and Cluster Fellowships - and application instructions, visit www.jcbl.org or e-mail jcb-fellowships@brown.edu.

Behind The Founding Foodie, A French-Trained Chef Bound By Slavery

Thomas Jefferson is known as a founding father and a founding foodie. Less well-known is the remarkable man who once fed his refined palate: James Hemings.

In the 18th century, Hemings was one of America’s most accomplished chefs. He was also Jefferson’s slave.

“It was a close relationship, a master-slave relationship, but different,” says renowned Jefferson historian Annette Gordon-Reed, author of the Pulitzer Prize-winning book The Hemingses of Monticello: An American Family.

Different, because the Jeffersons and Hemingses shared tangled family ties. Hemings was the son of an enslaved mulatto woman named Elizabeth Hemings and a white father, John Wayles — who was also the father of Jefferson’s wife, Martha. James Hemings and his relatives became Jefferson’s property as part of Martha’s inheritance.

On a moonless night in 1839, just off the coast of Cuba, 53 slaves took up sugar cane machetes against their captors aboard a boat called Amistad.

That mutiny 175 years ago triggered the first civil rights trial in U.S. history. In a courtroom in Connecticut, where slavery was still legal, white abolitionists defended the mutineers and won. When the U.S. government appealed the ruling, former President John Quincy Adams argued for the rebels in front of the Supreme Court, which upheld their acquittal.

The incident had a ripple effect, emboldening anti-slavery activists and leading to the creation of the American Missionary Association, which started anti-slavery churches before the Civil War and helped establish schools for freed slaves after the war.

One of those schools was Talladega College in Alabama. In 1939, to commemorate the 100th anniversary of the Amistad rebellion, the college hired celebrated painter and art professor Hale Woodruff to create three murals that would bring the tale to life.