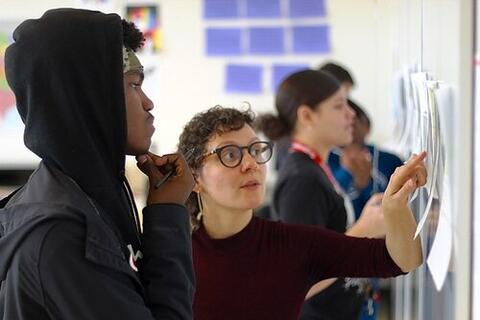 Braginsky rose to the top of the most competitive nomination pool ever—parents, students, teachers, and administrators nationwide nominated a record 8,510 teachers for the History Teacher of the Year Award in 2021.

Braginsky will be honored on Wednesday, October 6 at 8 p.m. ET in a special virtual ceremony, where Henry Louis Gates, Jr.—the Alphonse Fletcher University Professor and the director of the Hutchins Center for African and African American Research at Harvard University and a world famous author and documentarian—will present the award and a prize of $10,000.

A high school social studies and English teacher since 2007, Braginsky has worked at Metropolitan Business Academy, an interdistrict magnet public high school in New Haven, for the past eight years. Her current courses include African American and Latinx History, Journalism, and Contemporary Law.

Gilder Lehrman Institute President James Basker states, “Nataliya brings passion and commitment to her teaching, along with an intellectual and moral seriousness that benefits all the students she has taught over the past fifteen years. She is a tribute to the profession.”

Says Metropolitan Business Academy Principal Sequella H. Coleman, “Ms. Braginsky communicates well with students by being respectful of their differences and maintaining high expectations as they research topics to present evidence-based thesis projects, particularly around African American and Latinx History. Her commitment to the curriculum development in this area is to be commended and rewarded.”

“Nataliya is one of the most patient and creative teachers and facilitators I have worked with,” says Braginsky’s colleague Leslie Blatteau. “She holds herself to the highest standard to ensure her work is anti-racist, student-centered, and relevant for all participants. Her ability to listen and respond in a way that moves people forward along their individual paths is a gift to students and teachers alike.”

In addition to teaching, Braginsky formed a restorative justice working group at Metropolitan that led to the creation of a Youth Justice Panel, an alternative to punitive discipline policies. Since

“Against the backdrop of so much devastation, this recognition is all the more meaningful, and I receive it with gratitude, reverence, and hope,” says Braginsky.

She continues: “I am humbled by the gravity of this honor, one that does not belong to me alone. Teaching is not a solitary activity and its success does not belong to an individual—teaching is a collective project and this is a collective honor. This honor belongs to teachers across the country who are committed to teaching the truth, many of whom I work alongside and learn from on a daily basis. This honor belongs to New Haven and the histories this land holds for us to remember, both painful and inspiring, and always instructive. This honor belongs to the brilliant young people across the state, who fought for and won a legislative victory mandating that every high school in Connecticut offer an African American and Latinx History course. Finally and most importantly, this honor belongs to my students, who unearth untold histories, who educate their peers and communities, and who in their vision for what is possible, point us toward a more just future.”

Engaging and inspiring students in American history education has never been more critical. As the 2021 National History Teacher of the Year, Braginsky will serve as an important ambassador for the teaching community and a spokesperson and a thought leader on the importance of high-quality American history education for all, particularly students from underserved communities.

Inaugurated in 2004, the History Teacher of the Year Award highlights the importance of history education by honoring exceptional American history teachers from elementary through high school. The award honors one K−12 teacher from each state, the District of Columbia, Department of Defense schools, and US Territories. Winners of the state awards receive $1,000 and an archive of Gilder Lehrman books and resources for their school library, and become finalists for the national award.

Nominations for the 2022 History Teacher of the Year awards are now open. Students, parents, colleagues, and supervisors may nominate K−12 teachers for the award at gilderlehrman.org/nhtoy.

About the Gilder Lehrman Institute of American History

As a 501(c)(3) nonprofit public charity, the Gilder Lehrman Institute of American History is supported through the generosity of individuals, corporations, and foundations. The Institute’s programs have been recognized by awards from the White House, the National Endowment for the Humanities, the Organization of American Historians, and the Council of Independent Colleges. Learn more at gilderlehrman.org.