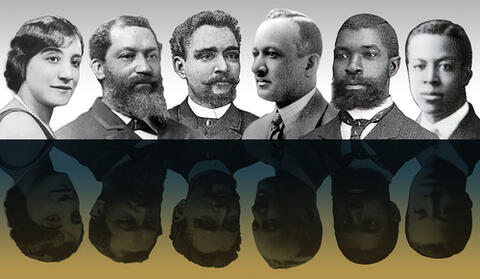 When Newman T. Baker first tried to play the washboard years ago, he had what he describes as an almost out-of-body experience. Though he had never played before, his hands seemed to glide over the ribbed surface of the board as if, he said, “my ancestors were showing me how to play.”

The washboard — a once common device for handwashing clothes that has also has a history as a rhythm instrument — is now Newman’s instrument of choice as a member of the New York City-based Ebony Hillbillies, an African American string band. The connection to ancestors he felt when he first played the washboard inspired him to learn about his grandfather, the Rev. T. Nelson Baker, who in 1903 became the first African American to receive a Ph.D. in philosophy in the United States — from Yale.

In addition to Baker, the panelists included Valerie Rooks, whose great-aunt Helen Hagan, a pianist who earned a Bachelor of Music degree from Yale School of Music in 1912, is believed to be the school’s first female African American student; Dr. Rebecca Motley, whose great-great grandfather Charles McLinn was a carpenter at Yale from 1870 to 1900 and whose other great-great grandfather, John E. W. Thompson, graduated from Yale School of Medicine in 1883; and Jackie Weems, whose great-grandfather George William Stanley Ish graduated from Yale in 1905, and whose great-uncle, Jefferson G. Ish Jr., was a 1909 Yale graduate.

The event was organized by Charles Warner Jr., a New Haven educator and member of the Yale and Slavery Working Group, and was hosted by the Yale and Slavery Research Project, the Gilder Lehrman Center for the Study of Slavery, Resistance, and Abolition at the MacMillan Center at Yale, and Dixwell Avenue Congregational United Church of Christ. The 200-year-old church was a place of worship for several of the honored Yale graduates during their time in New Haven.

David Blight, Sterling Professor of History and director of the Gilder Lehrman Center, noted that the conversation is one in a series hosted by the Yale and Slavery Research Project, which he chairs. President Peter Salovey established the project in 2020 to investigate Yale’s historic entanglements and associations with slavery, the slave trade, and abolition. The project gives students, researchers, and others the opportunity to investigate and reflect on this history and its relevance today.

“Rarely do we at a university just stop and appreciate and celebrate and breathe in why education matters so much,” said Blight. “Sometimes it comes in these walls, and sometimes outside — the Dixwell Congregational Church, HBCUs, families. But what a testament to the idea of why universities exist.”

The panelists described the routes their relatives took to Yale and recounted their post-graduation accomplishments.

Rooks said it was by “divine providence” that she learned more about her great-aunt Helen Hagan (1891–1964). While doing online research in 2017, she discovered that just a year before, her aunt had been honored by Yale and city officials at a ceremony at Evergreen Cemetery in New Haven. Hagen had been buried there in an unmarked grave near her parents, but thanks to a crowdfunding campaign to which the Yale School of Music contributed, a headstone was placed on her grave in September 2016.

Rooks described how Hagan, born less than 30 years after Emancipation, was a child prodigy pianist. She became the Dixwell Congregational Church’s pianist at age 9 and at age 13 she won a scholarship to the Yale School of Music. In 1912, the year she graduated, she performed with the New Haven Symphony Orchestra and was the first recipient of the Samuel Simon Sanford Fellowship for composition in piano, allowing her to study in Paris. She enrolled in Schola Cantorum, graduating in 1914, and performed for American troops during World War I. She later became a music educator, opening her own studios in New Jersey and, later, in Harlem.

In 2021, Rooks and her family attended virtually a New Haven Symphony Orchestra gala at which Hagan was posthumously awarded one of the ensemble’s Quartet Awards (in the category of history). The orchestra recently began a fund in Hagan’s memory to support underrepresented musicians.

“We are so happy Helen’s legacy will continue on,” said Rooks, a resident of North Carolina.

Motley, who lives in Michigan, said that her great-great grandfather Charles McLinn was born free in North Carolina and migrated to New Haven, becoming head carpenter at Yale. He held the job for some three decades. He was also a member of the Dixwell Congregational Church.

McLinn’s oldest daughter married John E.W. Thompson (1860-1918), who was born to Haitian immigrants and who was appointed by President Grover Cleveland as an ambassador to Haiti and Santo Domingo after graduating from Yale School of Medicine in 1883. He later practiced medicine in New York and in Bridgeport, Connecticut, but continued to be active in politics.

Weems recounted how her great-grandfather, George William Stanley Ish (1883–1970), attended Harvard Medical School after Yale and completed a residency at Freedmen’s Hospital in Washington, D.C. (It was the first hospital to provide medical treatment to former slaves and is now Howard University Hospital). He eventually returned home to Little Rock, Arkansas, where he was then the only Black surgeon in the state. He helped found several hospitals as well as the state’s first sanitorium for Black tuberculosis patients.

“He used a very progressive treatment for tuberculosis that also brought white patients in for treatment,” said Weems, who lives in Atlanta. “Some white people went to his home for the treatment because they didn’t want to go to the [Black] hospital. … He was very revered by his white colleagues.”

His brother, Jefferson G. Ish Jr. (1888–1962), worked in the insurance industry in Chicago after graduating from Yale and was cited by Ebony magazine as one of the “100 Wealthiest Negroes,” according to Weems. Following in his parents’ footsteps, Jefferson Ish also was involved in education, serving as a member of the board of trustees of Talladega College and at one time as president of the Agricultural, Mechanical, and Normal College in Arkansas.

“Education was something that was deep in my family’s genes,” said Weems, noting that while her great-great grandfather was born a slave in 1849, he eventually opened a school for Black students. “This legacy continued in my family. … What I have come to know about my great-grandfather is that he was a passionate man who cared deeply about the Black community, who believed, coming out of Yale and Harvard, that it was his responsibility to give back.”

Baker never had a chance to meet his grandfather, who died before he was born. Nevertheless, he once took his washboard to his grandparents’ gravesite in Pittsfield, Massachusetts, where he played for them.

Baker learned that his grandfather was born in 1860 in Virginia to an enslaved mother, the oldest of eight children. His mother taught him to read using the Bible, and he attended school until he was 12. He then worked on his father’s farm (property his father was given after Emancipation) until he was 21, when he enrolled in the all-Black Hampton Institute’s high school program. He eventually attended Boston University, graduating in 1893 as the valedictorian of his class, earned a degree at the Yale Divinity School, and became an ordained minister at the Dixwell Congregational Church. He continued to work as a minister at the church after he returned to Yale for his Ph.D.

“Helen [Hagan] started as the church organist during my grandfather’s pastorhood,” said Baker, noting the role of the Dixwell church, black fraternities and sororities, and historically Black colleges or universities (HBCUs) in their families’ lives. “There are lots of connections among the descendants.”

Warner, who is chair of the Connecticut Freedom Trail and the history committee chair of the Dixwell Congregational Church, pointed out that the American Missionary Association (AMA), a Protestant abolitionist group affiliated with Congregationalist churches, also played a role in promoting education for Black Americans. “What the AMA did was set these freed men on a fast track; they made leaps and bounds coming right out of slavery,” he said.

“There is a long history of Black community organizations that sustained Black education, whether churches or HBCU’s … which created a pipeline to these Ivy institutions,” added Feimster. “Yale was a stepping stone, but there were other steps along the way.”

Baker said that everywhere in the world he has traveled, he has found uncanny links with people he has met.

“My grandfather wrote a little book called ‘The Negro Melodies,’” said Baker. “He said you can’t sing Negro melodies if you don’t have Negro soul. To have a Negro soul you have to feel the oppression of your ancestors and own that history.  … I have watched our music change the world. Everywhere you go, there is a drum set. Everywhere you go, there is someone playing their version of a washboard. This is a credit to all [our] ancestors.”

From Oct. 28–30, 2021, the Gilder Lehrman Center’s annual conference will take as its theme “Yale and Slavery in Historical Perspective,” presenting in-progress research findings of the Yale and Slavery Research Project. For more information, visit the conference website.

Written by Susan Gonzalez for YaleNews.