A deep history of slavery: antiquity and modernity in dialogue 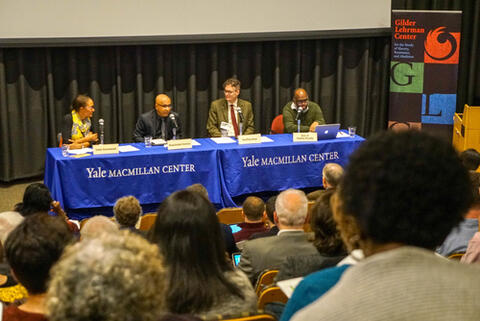 Throughout human history, people have enslaved others, though the intensification of such practices has varied across time and space. Historians have long recognized these basic facts of human experience, but have not often enough juxtaposed the ancient and modern worlds in their analyses, a comparative method which has great potential to shed light on individual slave systems as well as enslavement as a transhistorical phenomenon.

On 1 and 2 November, 2019, the Gilder Lehrman Center for the Study of Slavery, Resistance, and Abolition (GLC) sought to bring these distinct worlds into direct conversation with one another at its twenty-first annual conference titled “A Deep History of Slavery: Antiquity and Modernity in Dialogue.” A this first GLC conference to focus on an ancient topic, organizers aimed to explicitly juxtapose the classical and Atlantic worlds and explore the utility—and, indeed, the limits—of the comparative study of slave societies. Seeking to avoid facile assumptions about the genealogical relationships between ancient and modern slavery, conference co-organizers Noel Lenski (Professor of Classics and History at Yale) and David Blight (Director of the GLC and Sterling Professor of History at Yale) hoped to use the concept of ‘Deep History’ to connect the problems and interests of the GLC to the problems of slavery in antiquity.

Lenski kicked off the conference by encouraging attendees to “think about slaves as people in all of their humanity.” Pointing to Thomas Jefferson’s Notes on the State of Virginia (and the ongoing dissertation work of Yale Graduate Student Daniel Graves), Lenski highlighted explicit ties between ancient and modern slave systems. The dialogue between ancient and modern slavery is one that has been ongoing for quite some time, often to nefarious ends. But to get at a better understanding of slaveholding in each context and to determine the best practices for moving scholarship forward, Lenski challenged the conference-goers to seriously consider a series of questions: what is the utility in comparing Greek and Roman slavery with the more modern slave systems? Are the two qualitatively different? How might we account for variations in scope or scale across time and space? And, how might we think about the various ties which bind ancient models of slavery with more modern ones?

The conference attendees took up Lenski’s challenge over the next day-and-a-half of papers and conversations. In the first panel, “Varieties of Unfreedom: Slavery, Bondage, and Serfdom,” speakers explored the different ways that unfreedom can materialize within society. Sarah Bond (University of Iowa) opened the session with a discussion of compulsory trade and labor associations in the Roman Empire. Edward Rugemer (Yale) examined how early modern British thinkers used Greek myths in their discussions of Atlantic slavery, and pointed to the variety of statuses among the Black populations of the British Atlantic. Kostas Vlassopoulos (University of Crete) concluded the panel by exhorting attendees to historicize scholarly language and analyses around slaveholding.

Presenters on the second panel, “Capitalizing on Slavery: Trade, Economy, and Society,” examined historical links between society, economics, and slaveholding. John Bodel (Brown University) juxtaposed two groups of long-distance, overseas traders of enslaved persons, the Galatians in the Roman Empire and Rhode Islanders in the Atlantic, to look for similarities and differences in their operations. David Lewis (University of Edinburgh) drew from a handful of ancient authors to try to situate the enslaved in classical Athenian economic markets. Finally, Michael Ralph (New York University) explored the purchase of insurance for (and sometimes subversive uses by) enslaved persons in the United States.

The next panel, “Gendering Slavery: Men, Women, and Others,” was perhaps one of the meeting’s most provocative, as participants considered the plights of enslaved women and children. Thavolia Glymph (Duke University) looked to slave refugee camps in the American south in the archival records, recalling the violence perpetrated against the women and children in those camps and the continuing legacy of that violence today. Deborah Kamen (University of Washington) hoped to look at Greek slavery “through the lens of sex and gender,” by introducing conference-goers to Eisias, an enslaved woman attested in four inscriptions from Hellenistic Delphi and who eventually acquired freedom from slavery. Ulrike Roth (University of Edinburgh) compiled and discussed some funerary monuments for children in Rome in an effort to think about the methodologies of comparative slavery studies.

The panelists on the fourth panel, “Representing Slavery: Voices, Images, and Artefacts,” interrogated various ways enslaved person have been represented in the literary and material spheres. Emily Greenwood (Yale) pointed to scholars’ ethical responsibility to “be informed by the deep tectonics of slavery” as she revisited animalizing discourses regarding the enslaved in Greek literature. Lauren Hackworth Petersen (University of Delaware) reflected on graffiti, house shrines, and wall paintings from Pompeii as an exercise in ‘reading’ for enslaved voices. Teresa Singleton (Syracuse University) introduced a wide range of colonial-era objects—quotidian and exceptional—an enslaved person might have encountered, from games and dolls to bowls and jugs to walls and enclosures.

The next panel, titled “Othering Slavery: Race, Ethnicity, and Enslaveability,” considered ways that slavery ‘others’ the enslaved. Noting the long history of racialized ideas about Black people, Roquinaldo Ferreira (University of Pennsylvania) considered how understanding the slave trade might help clarify the geneses of ethnic identities as forcibly relocated enslaved persons adopted communities. J. Geoffrey Kron (University of Victoria) examined the intersection of classics, the Jim Crow-era racial state, and how Nazi ideologues adopted American models in the leadup to WWII. Dan-el Padilla Peralta (Princeton University) examined the “ripple effects of loss” for enslaved persons, noting “most who died in captivity of slavery didn’t make it to these warehouses of imperial knowledge [i.e., Livy, Strabo, Pliny, etc.]” and, thus, fell victim to Roman imperial epistemicide, the destruction of their systems of knowledge.

Presenters on the last panel at the conference, “Escaping Slavery: Flight, Manumissions, and Emancipation” examined ways of getting out of enslavement. Jane Landers (Vanderbilt University) explored Wolof and Maroon revolutionaries in colonial Española. Rose MacLean (University of California, Santa Barbara) considered the conceptual spaces between Roman manumission practices and citizenship by examining testamentary evidence. Lastly, Rachel Zelnick-Abramovitz (Tel-Aviv University) asked what happened to enslaved peoples in Greece after they have been freed, noting that many would become slave owners themselves.

At the end of the second day, the conference concluded with a plenary round table titled “Can the Study of Ancient and Atlantic World Slavery Speak to Each Other?” in which participants Noel Lenski, David Blight, Richard Blackett (Vanderbilt University), Jennifer Glancy (Le Moyne College), and Rebecca Futo Kennedy (Denison University) reflected on the conference’s proceedings as well as the scholarly search for enslaved persons in the past. Blackett advised his listeners: if we aim “to capture the people, we must talk about the stories they tell us.” Kennedy likewise reminded the audience that when we inquire into the past without critical self-reflection and accountability, “we do ourselves a disservice, the field a disservice, [and] society a disservice.”

The conference brought together a number of leading scholars from across the US and Europe to start an important conversation about slavery, bondage, and unfreedom in ancient and modern worlds. Yet, there is much more work to do. In fact, Lenski suggests, “the work that was done at the conference has spawned the idea that there is likely to be a follow-up conference at Brown University next fall.” From questions of translation to philosophies of historicizing the past, the dialogues that transpired at the conference will no doubt continue.