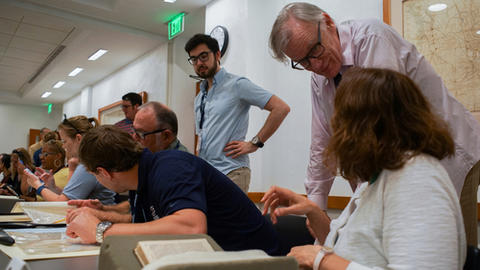 The Council of Independent Colleges (CIC) and the Gilder Lehrman Center for the Study of Slavery, Resistance, and Abolition (GLC) at the MacMillan Center at Yale University will partner on Legacies of American Slavery: Reckoning with the Past, a four-year initiative to deepen public understanding of the legacies of American slavery. The initiative is made possible by a $2.67 million grant awarded to the CIC by the Andrew W. Mellon Foundation of New York.

The GLC and CIC will develop a nationwide network of independent colleges and universities that will support and organize scholarly research, new course development, and public programs to explain slavery’s continuing influence in American politics, law, social structure, economics, and culture. Pulitzer Prize-winning historian David Blight, director of the GLC and Sterling Professor of History at Yale, will direct the initiative.

Participating colleges and universities will partner with community organizations to conduct scholarly and educational activities on a theme of regional significance. According to CIC President Richard Ekman, “Most small private colleges are anchors of their communities, providing educational opportunities for young people and adults alike. They are shaped by the same histories and legacies of slavery as the communities they serve and are uniquely positioned to engage community members in civil discussion of the contentious issues that shape our lives today.”

Through research, teaching, and public events, Legacies of American Slavery partners will explore the continuing impacts of slavery on life in communities across the nation.

“Historical legacies take many forms,” says Blight, “from stone and bronze to the habits and assumptions by which people live, or in the behaviors we display in our political practice. But no history—and no set of legacies—have been more vexing for Americans than the experience with racial slavery.”

Legacies of American Slavery is an opportunity, says Ekman, “to utilize the expertise and accessibility of independent colleges to understand the past. We have high hopes that, in conversation with one another and with their communities, and in collaboration with David Blight and the Gilder Lehrman Center’s exceptional network of historians, scholars, and public intellectuals, Legacies of American Slavery projects will have genuine impact.”

CIC member colleges and universities will be selected to participate through a competitive process to be launched in January 2020. Regional activities—including research conferences, teaching workshops, and public programs—will continue through the 2022–2023 academic year, and will culminate in a national summit in 2023.​

The Council of Independent Colleges (CIC) is an association of 765 nonprofit independent colleges and universities, state-based councils of independent colleges, and other higher education affiliates, that works to support college and university leadership, advance institutional excellence, and enhance public understanding of independent higher education’s contributions to society. CIC is the major national organization that focuses on services to leaders of independent colleges and universities and state-based councils. CIC offers conferences, seminars, publications, and other programs and services that help institutions improve educational quality, administrative and financial performance, student outcomes, and institutional visibility. It conducts the largest annual conferences of college and university presidents and of chief academic officers in the United States. Founded in 1956, CIC is headquartered at One Dupont Circle in Washington, DC. View more informtion about the CIC.

The Gilder Lehrman Center for the Study of Slavery, Resistance, and Abolition (GLC) is supported by the Whitney and Betty MacMillan Center for International and Area Studies at Yale University. The GLC is dedicated to the investigation and dissemination of knowledge about slavery and its legacies across all borders and all time. This includes the chattel slave system and its destruction as well as contemporary forms of coerced labor. The Center seeks to foster an improved understanding of the role of slavery, slave resistance, and abolition in the functioning of the modern world by promoting interaction and exchange between scholars, public historians, teachers, and the general public through publications, educational outreach, and other programs and events. View more information about the GLC.