In a recent interview, Harry Payne, an African American man, talked about his family’s history and his own long life. He also responded to the interviewer’s questions about his experience of discrimination and his memories of specific historical events. 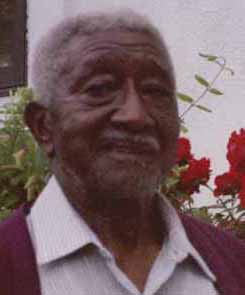 Harry Payne is a ninety one year old descendant of slaves. His paternal grandfather, John, came from Barbados, where he was not a slave, as a twelve-year-old child, in about 1820. Here he was bound as a slave in South Carolina. The wife of the slaveholder gave him his freedom papers prior to the Civil War when her husband was killed in a duel. She then sold the farm and freed her slaves.

Less is known about his mother’s (Minnie Watson) side of the family except that her father, Kayto Watson, was born into an African/Asian American slave family. Kato’s father “Yellow Toby,” was brought to America as a slave from Mongolia. As a slave he was used as a “breeder.”

It took John Payne about four years to get from South Carolina to New Jersey during the 1830s. He worked on his way north. On this journey he often had to keep to the woods in order not to be recaptured, even though he had freedom papers.

Eventually he arrived at a place that he thought might be Maryland or Delaware where he met some American Indians who knew the area and helped him. They crossed the northern part of the Delaware River, where it was very shallow, into New Jersey, near Trenton.

While working in farming, which he didn’t like, in the Trenton area he attended a camp meeting where he met someone looking for laborers to make bricks. He moved to Whiting in central New Jersey to take up that work. Here he met and married Harry’s grandmother, Keturah.

Keturah’s father, a Mohawk Indian, wanted land of his own to work but American Indians were not allowed to do so at that time. A friend, one of the Giverson brothers, who was of Irish ancestry, told him he could buy land if he changed his name. He took Keturah’s father to Philadelphia to arrange to get the paperwork to change his name to Anthony Hamilton. He had to tell the authorities he was of mixed ancestry (Indian and White).

Anthony Hamilton then bought 263 acres in Whiting right where Rt. 70 is today. He made handles for tools, and the ladies made quilts, fur hats and wove different sizes and kinds of baskets. He built a log cabin there around 1810. He had four daughters and one son who was a Pullman porter on the railroad out of Newark.

Harry says that his family was always welcome in their New Jersey community because the community needed them more than his family needed from them. His grandmother, Keturah Hamilton, was the local midwife, as was her mother, Annie Hamilton, before her.

John Payne bought 84 acres right next to his father-in-law. He and Keturah had four daughters and two sons. Harry’s father, Charles Payne, was born in 1857. John continued to keep all his things that he brought from slavery with him, his freedom papers, in a little wooden box he had made with hinges on it. The box was lost when the house burned down in 1947.

His father went into business for himself supplying white cedar to the sawmills. He was 52 when Harry was born in 1909. Harry began working with his father, cutting branches, when he was six years old. There were three other children in the family. His father died in 1951.

Harry started kindergarten, when he was almost five and continued through the Whiting grammar school to the eighth grade. It was a mixed, white and black, school. His father then “allowed” him to go to Lakewood High School where Harry attended from 1924 through to his graduation in 1928. The economic crash in 1929, the subsequent depression of the 1930s and the family’s lack of funds prevented Harry from furthering his academic education. But, he did enroll in the Bordentown Industrial School, a State school, where he was able to get a part time job and took general mechanics and auto mechanics from 1929 to 1931.

Harry is proud that he supported his family through his hard work.

* Although there were few jobs available during the depression, he was able to work two days a week as well as working in his father’s business. Both of these together with food stamps and his own garden permitted him to manage

* He saved his money and bought an old Ford truck, then went into business for himself; not maintaining cars for which he was trained because, “no one had money, no one had cars.” He collected moss in the local woods to be used by landscapers around the ball of nursery trees to keep them moist.

* Then Stanley Giberson showed him how to make charcoal. He began making charcoal in Whiting and sold it to the New York Charcoal Manufacturing Company who used it to make gunpowder during the 2nd World War.

* After the war he got a tractor-trailer and began carting pulpwood into Elizabeth, NJ, where it was used in sheet rock manufacture.

Harry tells the following stories of how both black and white accepted and depended upon each other in the community and in school:

My father got a lame mare from the Freehold raceway that they were going to sell to those who made dog food. He made a salt and clay compound and put it around her to draw all the misery out of her. He put a wagon to her and she became the community horse for whoever wanted it. If a child were real sick they’d have to go to New Egypt or Toms River for a doctor. His father would not drive them there. Anyone could take it and drive it himself or herself.

If we needed…to borrow something from the bank, we never had any trouble; or if we needed an extra team of horses [we got them].

If you needed anything and we had it, you got it. We kept our word; we looked for you to keep yours.

About 20% of the students at Lakewood High School were African American. There were no problems of discrimination that I knew of. My buddy at school Leslie Christofferson was white. I never had a fight in there. I still go to their reunion days.

He thinks he was never treated badly by white residents of his town because he learned early to keep to himself. His father taught him how to deal with bigots:

My father told me when I was young, ‘Harry, I’m quick tempered and I know you are too. I can see it in your face when I get after you and scold you sometimes. But, don’t let that rule you…think before you act.’

He said, ‘it’s good to read your bible. But, carry it in your heart. Remember God is over us all. If you do wrong, He knows it. If you do right, He’ll reward you for it.’

He said, ‘Follow each of the 10 Commandments each day and abide by them and God will abide by you because they are His commandments.’

Pop said, “ ‘Always give them ten steps…and when you turn around, always bring something with you.’

Harry also recalled a cross burning in his town during the depression. He believed the burning was directed at migrant workers who lived there temporarily. But, there was concern that they would become permanent. Further, he believed that the local townspeople were responsible and not the area Ku Klux Klan. Albert Miles of Detroit came here and asked the New Jersey Secretary of State, Mathis, for improved law enforcement in Whiting in situations such as this.

Harry and Gladys Payne were married twenty-three years ago after both were widowed. They still live in Whiting.