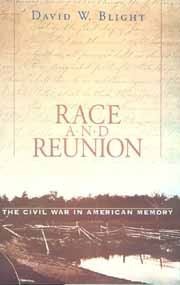 The winning book, published by Harvard University Press, explores how the nation achieved sectional harmony by re-inventing wartime memory — ignoring the role of slavery and race and instead celebrating the common valor and shared glory of white Union and Confederate soldiers in the name of healing the sectional divide. Blight shows how the moral imperative for the Civil War — the destruction of slavery — was downplayed, and how myths of the “Lost Cause” and the “Old South,” still thriving today, grew in both literature and popular memory.

Praising Race and Reunion as a “moving and astounding book,” Congressman Jesse L. Jackson, Jr. has said: “David Blight has hit the nail on the head with this book. By masterfully addressing the central issues of the turn of the twentieth century — race and national reunion — he provides the historical perspective we need to attack the fundamental problem of race relations and to face the memory of slavery in America today.” The Gilder Lehrman Center also honored with special recognition The Slaveholding Republic (Oxford University Press, 2001) by the late historian Don E. Fehrenbacher. His posthumously published masterpiece traces the impact of slavery on American government from the Revolution to the end of the Civil War.

The Frederick Douglass Book Prize is administered by the Gilder Lehrman Center for the Study of Slavery, Resistance, and Abolition, a part of the MacMillan Center for International and Area Studies. The prize is endowed by philanthropists Richard Gilder and Lewis Lehrman, pre-eminent collectors with a long record of encouraging, recognizing, and supporting the study of American history. They also sponsor magnet history schools, teacher education programs, and the annual Lincoln Prize, among other initiatives. Noted Mr. Gilder and Mr. Lehrman: “Blight’s book is not only good history, it is superb writing. The masterful and engaging style of Race and Reunion makes it extraordinarily appealing to a broad audience. That is important, because few Americans have a clear understanding of the impact of slavery in our nation’s history. This book will be read, and it will make a difference.”

Commented the Gilder Lehrman Center’s director, David Brion Davis, professor of history at Yale: “Race and Reunion is a highly original examination of the terrible costs, in terms of racial exclusion and discrimination, that our nation paid for sectional reunion and reconciliation in the half-century following the Civil War. This magnificent work will be a historical landmark for decades to come.”

Serving on the jury for the 2001 Frederick Douglass Prize were historians Ira Berlin, of the University of Maryland; Drew Gilpin Faust, director of the Radcliffe Institute; and Christopher Brown, of Rutgers University. The jurors received more than 40 entries, which they evaluated on the criteria of centrality to the subject, originality, and quality of writing and research.

Commenting on the significance of this year’s prize-winning work, jury chair Ira Berlin observed, “Blight’s book is deeply rooted in the history of post-bellum America, but it addresses matters of social justice and national reconciliation that reach beyond American history and appear to be much with us today.”

The Frederick Douglass Prize was established two years ago to stimulate scholarship in the field by honoring outstanding accomplishments. The award is named for Frederick Douglass (1818-1895), the onetime slave who escaped bondage to emerge as one of the great American abolitionists, reformers, and orators of the 19th century. The $25,000 cash award is accompanied by a cast bronze medallion featuring Douglass’ portrait in relief.

The 2001 prizewinner, David Blight, is Class of 1959 Professor of History and Black Studies at Amherst College in Amherst, Massachusetts. He is the author of Frederick Douglass’s Civil War: Keeping Faith in Jubilee (1989), an intellectual biography that probes the meaning of the war in Douglass’ life and thought. Blight is also the editor of and author of introductions to five books, including When This Cruel War Is Over: The Civil War Letters of Charles Harvey Brewster (1992); Narrative of the Life of Frederick Douglass, An American Slave (1993); and Caleb Bingham, The Columbian Orator (1997), a re-issue of the book of oratory and antislavery writings that Frederick Douglass discovered as a youth. Blight has also written many articles on abolitionism, American historical memory, and African-American intellectual and cultural history.

Don E. Fehrenbacher, author of The Slaveholding Republic, died in 1997. He was the William Robertson Coe Professor of History and American Studies at Stanford University, where he taught for 30 years. He won the Pulitzer Prize in 1979 for The Dred Scott Case: Its Significance in American Law and Politics, and he edited and completed David M. Potter’s The Impending Crisis, which won the Pulitzer Prize in 1977. He was awarded the Logan Hay Medal in 1989, and the Lincoln Prize for lifetime achievement in 1997. Ward M. McAfee, who completed the work after Fehrenbacher’s death, is Professor of History at California State University, San Bernardino. One of Fehrenbacher’s former students, he has published in a variety of fields, including the Civil War and Reconstruction, world religions, and California history. He lives in Upland, California.

Two understandings of the Civil War emerged in post-bellum United States. One was the emancipationist vision which saw the war as an abolitionist triumph and an opportunity for the nation to realize the egalitarian promise of the Declaration of Independence. The other denied the significance of slavery and race either as a cause of the war or in its results, and instead emphasized the common valor and shared glory of Union and Confederate soldiers — or, at least, white ones — in the name of healing the sectional divide.

Race and Reunion traces the triumph of the reconciliationist vision and the retreat from equality. Central to this making and remaking of the memory of the Civil War was the reinterpretation of slavery, which emerged as a benign — if not benevolent institution —and a new understanding of race.

Blight’s book demonstrates how the memory of the war was as critical as the war itself in shaping American life after 1865, and hence the struggle was just as intense. The terrain of the struggle, moreover, was equally broad; Blight surveys the history, politics, literature, and public culture of the period. While the reconciliationists carried the day, a neo-abolitionist oppositional tradition — nurtured largely in black communities — also developed. Race and Reunion follows those two traditions over the course of a long half century, in the process demonstrating how the memory of slavery, war, and Reconstruction became the lynchpin of the new system white supremacy. The costs of sectional reconciliation were tragically high. The nation healed; the races divided.

Blight’s book is deeply rooted in the history of post-bellum America, but it addresses matters of social justice and national reconciliation that reach beyond American history and appear to be much with us today.