David Eltis’ acclaimed new study, The Rise of African Slavery in the Americas, won the second annual $25,000 Frederick Douglass Prize for the year’s most outstanding book on slavery, resistance, and/or abolition. The coveted award — the most generous in this field of study — was presented at a banquet at the Yale Club in New York City on Tuesday, September 26, 2000. 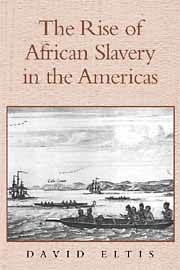 The winning book, published by Cambridge University Press, explores two centuries of the English Atlantic slave system, between 1650 and 1850, arguing, among other things, that the transatlantic slave trade was born of African strength, rather than African weakness. The study offers other fresh insights and new interpretations in an attempt to understand the paradoxical question of why nations that claimed the strongest commitment to individual freedom nonetheless created the most exploitative slave system in world history.

The Frederick Douglass Book Prize is administered by the Gilder Lehrman Center for the Study of Slavery, Resistance, and Abolition, a part of the MacMillan Center for International and Area Studies. The prize is endowed by philanthropists Richard Gilder and Lewis Lehrman, pre-eminent collectors with a long record of encouraging and recognizing the study of American history. They also sponsor magnet history schools, teacher education, and the annual Lincoln Prize, among other initiatives.

Commented the Gilder Lehrman Center’s director, David Brion Davis, professor of history at Yale: “This work fundamentally reshapes our understanding of the origins and development of African slavery in the New World. It gives us a wholly new view of African resistance to enslavement, as well as the agency of Africans in shaping their destinies.”

Noted Mr. Gilder and Mr. Lehrman: “Professor Eltis’ painstakingly researched and convincingly argued book stands as a major contribution to the field, and we are pleased to honor it with the 2000 Frederick Douglass Prize. This study is certain to provoke scholars and students to analyze and debate its findings for years to come. It has energized the field, and we are honored to recognize this remarkable achievement.”

The Frederick Douglass Prize was established last year to stimulate scholarship in the field by honoring outstanding accomplishments. The award is named for Frederick Douglass (1818-1895), the onetime slave who escaped bondage to emerge as one of the great American abolitionists, reformers, and orators of the 19th century. The $25,000 cash award is accompanied by a cast bronze medallion featuring Douglass’ portrait in relief.

Serving on the jury for the 2000 Frederick Douglass Prize were historians James Brewer Stewart, of Macalester College, Richard Blackett, of the University of Houston, and Ruth Mazo Karras, of the University of Minnesota. The jurors considered more than three dozen entries published in 1999, whose topics ranged from slavery in nineteenth-century Morocco to the role of religion in political antislavery in the United States.

The 2000 prize winner, David Eltis, Professor of History at Queens University in Ontario, Canada, is widely recognized as one of the leading scholars of the African Diaspora. He currently serves also as Associate of the W. E. B. Du Bois Institute at Harvard University, and a research lecturer at the University of Hull, England.

Professor Eltis is the author or editor of two previous books and has contributed numerous articles to scholarly journals and quarterlies that specialize in both history and economics. In 1999 he not only authored The Rise of African Slavery in the Americas, but (together with David Richardson, Stephen Behrendt, and Herbert S. Klein), co-authored The Transatlantic Slave Trade: A Database on CD-ROM also published by Cambridge University Press. This groundbreaking data base was praised by the Boston Globe as “the most comprehensive computerized record of the Trans-Atlantic Slave Trade, allowing teachers, scholars, and ordinary Americans unprecedented information on 27,233 slave trips to the New World, or 70 percent of all voyages.”

David Eltis’s The Rise of African Slavery in the Americas exemplifies international history and interdisciplinary scholarship at their finest. Triangulating between Europe, Africa, and the colonial Americas, Eltis’s volume presents the development of the English/Atlantic slave system with great skill and sophistication. Its massive documentation gives it profound authority as a work of social science. Its deep insights and far ranging interpretations make it a powerful expression of humanistic spirit. By stressing Africa’s influence in shaping new world slavery, and the slave trade as a means for forestalling European colonialism in Africa itself, Eltis transforms our understanding of the dynamics of global development on four continents over a period of one hundred and fifty years. By delineating the changing bases of group identity among Europeans, he lays bare the tragic paradox of why racial biases made freedom for those of European ancestry so deeply implicated in the enslavement of those with roots in Africa.