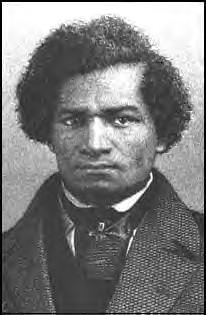 One of the most influential African Americans in U.S. history. He was born Frederick Bailey as a slave in Maryland. He escaped from slavery in 1838 and as a self-made man eventually became a famous writer and orator. He championed the cause of abolition in America and human rights both here and in Europe (including Ireland where he spoke in support of Irish peasants during the Great Famine). He advocated a non-violent battle against segregation and for voting rights.

Douglass on the Web:

Frederick Douglass Papers
A portal to a current project on Douglass. Contains a biographical sketch, chronology, a reading list, published works of Douglass and a wealth of related sites.

Frederick Douglass
A thorough biography covering stages in Douglass’s life from slave to his death in 1895. Includes chronology and reading list.

Douglass Speech - The Hypocrisy of American Slavery
Includes Douglass’ famous speech of July 4, 1852 where he expresses what Independence Day does not mean to him.

Douglass, Frederick. Life and Times of Frederick Douglass, his Early Life as a Slave, his Escape from Bondage, and his Complete History to the Present Time.
Electronic Edition: http://metalab.unc.edu/docsouth/douglasslife/douglass.html