Though the Catholic priests and brotherhoods labored among the Negro slaves from their first arrival in this country until the Emancipation, yet the work of the Catholic Church may be said to have only begun in earnest when the Church of St. Francis Xavier, in Baltimore, Md., in 1871, was placed in charge of the Fathers of the American Branch of the Society of St. Joseph. However, there were isolated attempts before this and scattered parish organizations throughout the county, but when Monsignor, afterwards Cardinal, Vaughn, the founder of the Missionary Society whose members are commonly known as Josephites, visited this country and was afterwards allowed to send four priests of his community to devote their entire attention to Negro religious work the interest of the Catholics of the Untied States began to be directed to the work as never before. The prelates of the Council of Baltimore, in 1884, awakened new enthusiasm by decreeing that a collection should be taken up, instruction on race relationships be given, in all the Catholic churches of the United States on the first Sunday of Lent.

In 1907 there was established a Board of Archbishops who should have general charge of this branch of Catholic missionary activity. Incorporated under the laws of Tennessee it is known as “The Catholic Board for Mission Work among the Colored People.” The Director General is Rt. Rev. Mgr. John E. Burke, of New York City, who is assisted by five other priests-Rev. D. J. Bustin, LL.D., Rev. James J. Mulholland, Rev. J. Benedict Leonard, all of Scranton, Pa.; Rev. Thos. F. McBride, of Albany, N.Y., Rev. Edward h. Kelly, of Pittsburgh, Pa., and by Mr. Elmo M. Anderson (colored) of Pittsburgh, Pa., as Business manager.

Since the establishment of this Board, sixty-nine new mission centres have been started in the South. Over eighteen thousand have been added to the list of children attending the colored parochial schools, making the total enrollment over twenty-two thousand. The Board pays the salaries of one hundred and seventy-two teachers who are engaged exclusively in colored missionary work, making a total appropriation to Negro education of fifty thousand dollars annually. Many of these schools have a complete standard high-school course, the most noted being Xavier University of New Orleans, La., with 493 students, under the care of Mother Katherine Drexel and the Sisters of the Blessed Sacrament. Most of them have added, or are preparing to add, a first and second year high school course to their already established grammar school.

In September, 1920, at the suggestion of Pope Benedict XV., the Fathers of the Divine Word at Greenville, Miss., opened the first ecclesiastical seminary in the United States to educate and train colored boys for the priesthood, thus laying the foundation for a native Catholic Colored Priesthood in the united States.

A monthly magazine “Our Colored Missions,” is published by the Board.

At present there are 175 priests devoting themselves exclusively to the missions among the colored people and fifty-five who have schools for colored attached to white churches, making a total of 230 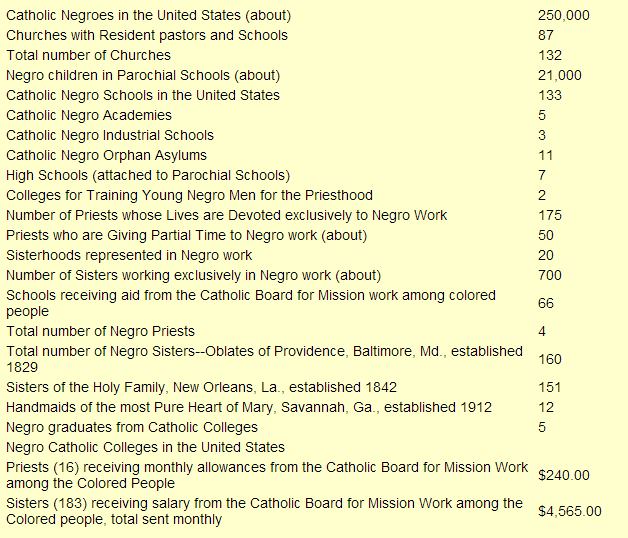