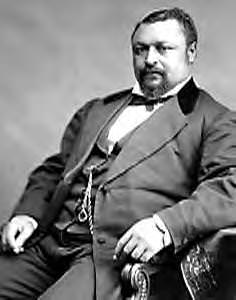 Bruce was the first Black person to serve a full term in the U.S. Senate. He was born into slavery but escaped as the Civil War began. He taught school and founded Missouri’s first school for Blacks. Later he moved to Mississippi where he held a number of local county positions including sheriff. During Reconstruction, in 1875, Bruce became U.S. Senator from Mississippi. He pressed for civil rights not only for Blacks but also for Native Americans and Chinese immigrants. After he left the Senate, Pres. Garfield appointed him to several federal positions.

Bruce on the Web:

Bruce, Blanche Kelso
A short piece on the adult life of Bruce. Has link to Reconstruction.

Blanche Kelso Bruce
Describes his life from his early years in slavery, his initial education and the many mile posts on his way to becoming a Senator. Also provides a short reading list.