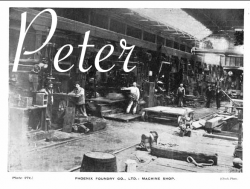 Peter, one of many enslaved individuals hired out as laborers in the antebellum south, worked in an Allegheny County, Virginia, ironworks while his owner received compensation. In 1854 Peter collapsed and died while working in the factory, and rumors spread that he had died because of cruel treatment at the hands of his factory managers. Wishing to avoid this rumor from spreading, Peter’s owner and employers hired two doctors and amassed a committee of seven local men “of the highest respectability” to witness the exhumation and autopsy of Peter’s remains, in order to prove that he had not died from mistreatment. As you read the corresponding circular that they printed and published in order to share several affidavits regarding their findings, consider the rationale for their conclusion, as well as what aspects of Peter’s death particularly worried his owner/managers.