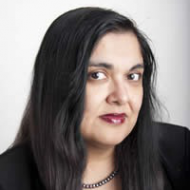 Manisha Sinha joins Slavery and Its Legacies to discuss the transnational history of the movement to abolish slavery.

Manisha Sinha is professor and the James L. and Shirley A. Draper Chair in American History. She was born in India and received her PhD from Columbia University where her dissertation was nominated for the Bancroft prize. She was awarded the Chancellor’s Medal, the highest honor bestowed on faculty and received the Distinguished Graduate Mentor Award in Recognition of Outstanding Graduate Teaching and Advising from the University of Massachusetts, Amherst, where she taught for over twenty years. Her recent book The Slave’s Cause won the 2017 Frederick Douglass Book Prize.