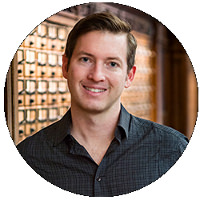 Jonathan Schroeder, Assistant Professor of English and History at the University of Warwick and a recent Postdoctoral Associate at Yale’s Digital Humanities Lab, discusses his research project “Passages to Freedom: Worlding the North American Slave Narrative.” “Passages to Freedom” examines the language and mobility of 294 African-American slave narratives.

Jonathan Schroeder is an Assistant Professor of English and History at the University of Warwick. He received his Ph.D. in English Language and Literature from the University of Chicago and was a recent Postdoctoral Associate at Yale’s Digital Humanities Lab. His project at the DHLab, “Passages to Freedom: Worlding the North American Slave Narrative,” examines the language and geography of 294 African-American slave narratives. How did African-Americans make their escapes? What does their mobility look like in slavery? In freedom? Are there distinct languages of slavery and freedom? And how do answers to these questions change after the Fugitive Slave Act of 1850? After the slave narrative was affiliated with antebellum abolitionist networks?

Jonathan’s book manuscript, “Prisoners of Loss: An Atlantic History of Nostalgia,” charts the first phase in the globalization of nostalgia, tracking how this medical concept was carried to the New World and used to design new health care systems for slaves and soldiers in America, Brazil, Cuba, and Haiti. By virtue of this process, he argues, nostalgia was transformed from a disease of travel suffered by European ethnics into the exemplary disease of racial captivity in the nineteenth century, one that can potentially help us make sense of present-day scenes of racial and ethnic melancholy.He is now focusing on writing a biography of John S. Jacobs, who is today best known as the brother of Harriet Jacobs.