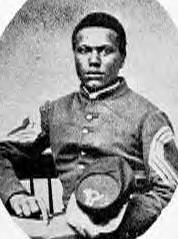 The 54th Massachusetts Infantry was the first Black Regiment to be recruited in the North during the Civil War. Frederick Douglass aided in this recruitment and two of his sons served in the unit. The 54th gained fame and recognition for its courage and valor in the assault on Battery Wagner, SC for which one of its soldiers, William Carney, became the first Black to receive the Congressional Medal of Honor. (The accompanying photo is of Sgt. Major John H. Wilson a member of the unit).

54th Massachusetts on the Web:

Fifty-fourth Massachusetts Infantry
A brief history of the Regiment. Includes previous photo as well as those of other soldiers and officers.

54th Massachusetts
Recounts the beginnings of this group with the Secretary of War’s authorization to form regiments that could “include persons of African descent…” Also, compares pay of black soldiers with that of white soldiers.

Books about The 54th Massachusetts: