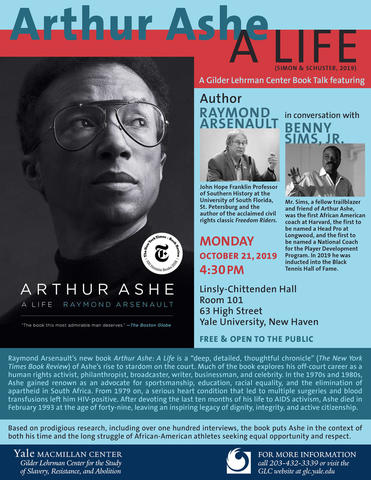 Author Raymond Arsenault (John Hope Franklin Professor of Southern History at the University of South Florida, St. Petersburg) in conversation with Benny Sims, Jr.
Mr. Sims was: the first African American assistant tennis coach in the Ivy League (Harvard);
Head tennis pro at the famed Longwood Cricket Club;
Recruited by Arthur Ashe as a National Coach for the USTA Player Development program; and
2019 inductee to the Black Tennis Hall of Fame
Raymond Arsenault’s new book Arthur Ashe: A Life is a “deep, detailed, thoughtful chronicle” (The New York Times Book Review) of Ashe’s rise to stardom on the court. Much of the book explores his off-court career as a human rights activist, philanthropist, broadcaster, writer, businessman, and celebrity. In the 1970s and 1980s, Ashe gained renown as an advocate for sportsmanship, education, racial equality, and the elimination of apartheid in South Africa. From 1979 on, he was forced to deal with a serious heart condition that led to multiple surgeries and blood transfusions, one of which left him HIV-positive. After devoting the last ten months of his life to AIDS activism, Ashe died in February 1993 at the age of forty-nine, leaving an inspiring legacy of dignity, integrity, and active citizenship. Based on prodigious research, including more than one hundred interviews, Arthur Ashe: A Life puts Ashe in the context of both his time and the long struggle of African-American athletes seeking equal opportunity and respect, and “will serve as the standard work on Ashe for some time” (Library Journal, starred review).