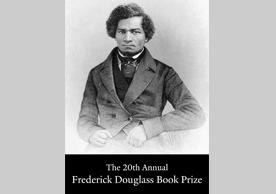 The finalists are: Daina Ramey Berry for “The Price for Their Pound of Flesh: The Value of the Enslaved, from Womb to Grave, in the Building of a Nation” (Beacon Press); Erica Armstrong Dunbar for “Never Caught: The Washingtons’ Relentless Pursuit of Their Runaway Slave, Ona Judge” (Simon & Schuster); Sharla M. Fett for “Recaptured Africans: Surviving Slave Ships, Detention, and Dislocation in the Final Years of the Slave Trade” (University of North Carolina Press); and Tiya Miles for “The Dawn of Detroit: A Chronicle of Slavery and Freedom in the City of the Straits” (The New Press).

The winner will be announced following the Douglass Prize Review Committee meeting in the fall, and the award will be presented at a celebration in New York City on February 28, 2019.

A jury of scholars that included Catherine Clinton (Chair), of University of Texas at San Antonio; Ada Ferrer, of New York University; and Sandra Elaine Greene, of Cornell University selected this year’s finalists from a field of more than 70 nominations.  You can find the jury’s descriptions of the finalists’ books here.