Launch of the Re:Structure Lab: new collaboration between University of Sheffield, Stanford, and the Gilder Lehrman Center at Yale 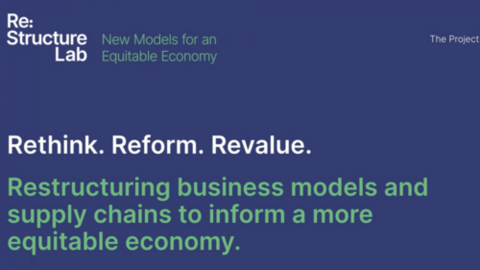 The Gilder Lehrman Center for the Study of Slavery, Resistance, and Abolition at the MacMillan Center at Yale is pleased to announce the launch of the Re:Structure Lab project: restructurelab.org/

A collaboration between researchers at the Sheffield Political Economy Research Institute (SPERI) at the University of Sheffield, the Center for Human Rights and International Justice at Stanford University, and the Gilder Lehrman Center, the project is funded by Humanity United and the Freedom Fund. The goal of this exciting new project is to reimagine business models and global supply chains to promote fair, equitable labor standards in light of the pandemic.

The Re:Structure Lab draws on recent academic research across several disciplines to develop an ambitious series of Forced Labour Evidence Briefs. Each will make recommendations for how to restructure business models and supply chains to promote equitable labor standards and protect workers from forced labor and exploitation.

The Lab’s first Forced Labor Evidence Brief on Due Diligence and Transparency Legislation co-authored by Genevieve LeBaron, Andreas Rühmkorf, and colleagues is now live on the Lab website with five more Briefs and a Blueprint for Change to be published over the coming months.

Download the Evidence Brief: Due Diligence and Transparency Legislation

The collaborative project is co-led by Genevieve LeBaron of SPERI and Jessie Brunner, Director of Human Trafficking Research at The Center for Human Rights and International Justice at Stanford University. The Gilder Lehrman Center’s lead researcher on the project is Luis C.deBaca, GLC Senior Fellow in Modern Slavery.

Further information about the project is available here: https://glc.yale.edu/modern-slavery/research/restructure-lab-new-models-equitable-economy