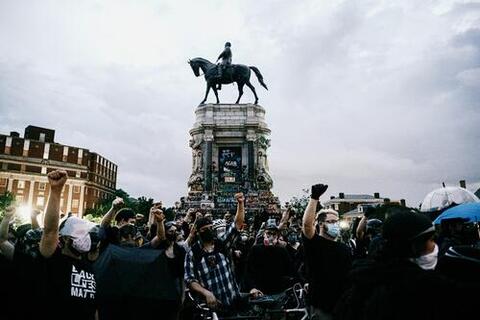 In November, 1989, when the Berlin Wall suddenly began to crumble and then fall, much of the world watched in awe. Could it be true that Communism was about to collapse? For seventy years, it had been a system, an ideology, that ordered large swaths of the globe. Now a whole vision of history—a vision meant to maximize freedom, but which had turned, over time, into tyranny—seemed to be leaving the stage.

Many people still possess, as I do, little pieces of concrete from the Berlin Wall. And many of us feel some awe in seeing, during these past few weeks, Confederate monuments in America likewise reduced to pieces, relics of the collapse, after a hundred and fifty-five years, of the public vestiges of the Lost Cause tradition. The summer of 2020, like the autumn of 1989, could mark the death of a specific vision of history. If so, it has taken a long, long night—to borrow from Robbie Robertson and the Band—to drive old Dixie down.

We should not celebrate too much as monuments topple and old slave-auction blocks are removed. History did not end when the Soviet Union dissolved, and it will not end now, even if a vibrant movement sweeps a new age of civil rights into America. Most of all, we must remember what the Lost Cause is and was before we try to call it past. As so many now understand—whether they have read William Faulkner or Toni Morrison or the thousands of scholars who have reshaped American history in the past three generations—slavery, the Civil War, Reconstruction, and segregationare never purely historical. They still haunt the air we breathe, or cannot breathe. They are what W. E. B. Du Bois once called, in 1901, our “present-past.” They are a history never to be erased, even if and when the bronze Jefferson Davis and Robert E. Lee can be carried out of the U.S. Capitol and left at the Smithsonian Castle, for a decision on their final resting place.