The 2018 Presidential Elections and Brazil’s Slave Past 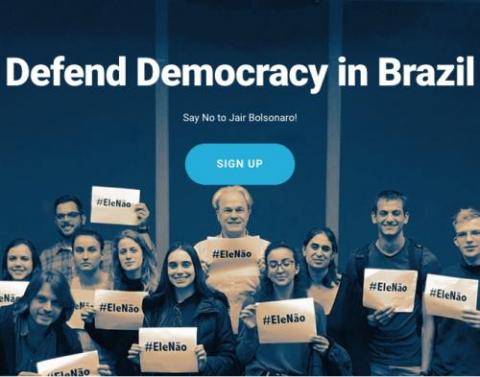 On Sunday, October 7, 2018, Brazilians came close to electing far-right candidate Jair Bolsonaro to the presidency. Once a fringe politician who repulsed even conservatives with his open defense of authoritarianism, torture, and bigotry, Bolsonaro won 46.2 percent of the first-round presidential vote. He is now poised to prevail on the October 28th runoff against the center-left Workers’ Party candidate Fernando Haddad, who came in second place with 29 percent of the vote. Placing Brazil at the center of a global wave of extremism threatening basic democratic institutions and human rights, Bolsonaro’s phenomenal rise has shocked many around the world. After thirteen years of progressive government embodied in the popularity of President Luis Inácio Lula da Silva, few expected that such a sweeping far-right counterrevolution would take hold in Brazil. Bolsonaro’s success, though, is not an historical anomaly. Quite on the contrary, it has deep roots in Brazil’s conservative politics and the nation’s reckoning with its slave past.

As the longest-lasting slave society in the Western hemisphere, Brazil is still home to the largest Afro-descendant population outside Africa. It is a nation deeply fractured along racial lines, where inequalities accumulated over 300 hundred years of colonialism and chattel slavery still frame daily life. Thus, it should come as no surprise that, in election years, Brazil’s slave past is called upon in support of different political projects. Jair Bolsonaro’s campaign has thrived on the use of racist tirades reminiscent of nineteenth-century pro-slavery advocates. In nationally televised interviews, he has offered nothing less than a reinterpretation of Brazilian history in the service of white supremacy. Denying Portuguese participation in the transatlantic slave trade, Bolsonaro has argued that Brazil “owes no debt” to its black citizens for Africans themselves “handed over the slaves” to human traffickers. In the same vein, he has condemned interracial marriages as a form of promiscuity and disparaged quilombolas (descendants of escaped slaves) as being overweight, useless, and “not even fit for procreation,” promising not to leave “a centimeter” of land for their reservations despite rights enshrined in Brazil’s 1988 Constitution. His anti-black agenda is set on rolling back affirmative action policies in higher education and public-sector jobs along with revoking constitutional amendment 81/2014, the judicial pillar behind the struggle to eradicate modern-day slavery in Brazil.

“What historical debt are you talking about? I didn’t send anyone into slavery,” said Bolsonaro last July. Feeling betrayed by the uplifting promises of liberalism and perhaps threatened by its levelling effects, his electorate has chosen to endorse this whitewashed version of Brazilian history. Bolsonaro’s social conservatism has presided over the reorganization of the right in Brazil exactly because the country has yet to come to grips with its long experience with forced labor, dictatorship, and patriarchy. As a former military captain, he casts himself as the outsider who will eliminate crime and corruption through the use of state force. He is, however, a 27-year veteran in the Brazilian Congress whose inflamed rhetoric has already led to a wave of violence against minorities across the country. Mestre Moa do Katendê, a Capoeira master, musician, and advocate of Afro-Brazilian rights, is the first post-election victim of Bolsonaro’s brand of extremism. He was murdered on election night in Bahia after declaring his support for Worker’s Party candidate Fernando Haddad at a local bar. In the end, whatever happens in the runoff scheduled for the end of October, the 2018 elections will be more than an inflection point in Latin American history. The future of Brazil will stand scrutiny as a referendum on the prospects of multiracial democracy itself.

Please consider signing on to the petition to save democracy in Brazil at http://democracybrazil.pythonanywhere.com