Physiognomy, the Eyes of Slaves, and Medieval Scientific Racism

Part of the Racism, Xenophobia, and Slavery before the Modern Era Lecture Series. Steven A. Epstein is a historian of medieval Europe, who specializes in economic and social history. His has worked on city government in the Middle Ages, slavery and labor in Italy, and family life in urban medieval Italy and the Mediterranean. His book Speaking of Slavery: Color, Ethnicity, and Human Bondage in Italy (Cornell Univ. Press, 2001) reveals the development and dynamics of the institution of slavery in a multi-cultural medieval society, and questions the relation between slavery and the concepts of racism and color. His other publications include: Wills and wealth in medieval Genoa, 1150-1250 (Harvard Univ. Press, 1984), Wage labor & guilds in medieval Europe (The Univ. of North Carolina Press, 1991), Genoa and the Genoese 958-1528 (The Univ. of North Carolina Press, 1996) a 1997 Choice outstanding academic book, and Purity lost : transgressing boundaries in the Eastern Mediterranean, 1000-1400 (The Johns Hopkins Univ. Studies in Historical and Political Science, 2006). 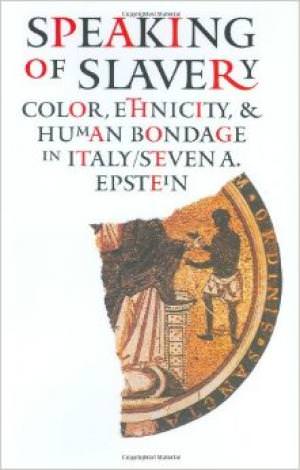