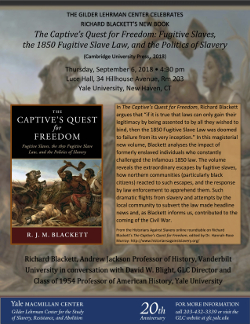 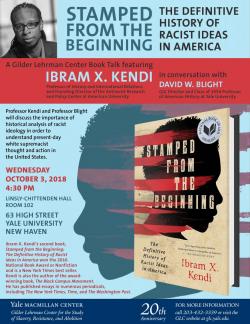 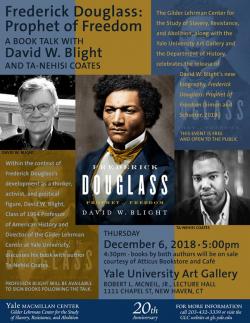 The Gilder Lehrman Center for the Study of Slavery, Resistance, and Abolition, the History Department at Yale, and the Yale University Art Gallery celebrate the release of David W. Blight’s new biography, Frederick Douglass: Prophet of Freedom (Simon & Schuster 2018). Join us for a stimulating conversation in the Yale University Art Gallery’s lecture hall. Within the context of Frederick Douglass’s development as a thinker, activist, and political figure, Professor Blight (Class of 1954 Professor of American History at Yale and Director of the Gilder Lehrman Center) will discuss the book with author Ta-Nehisi Coates. 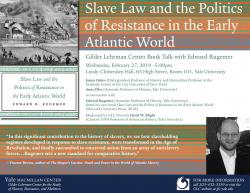 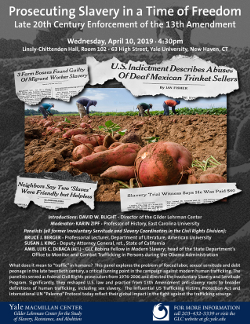 Panel moderator: Karin Zipf (Professor of History, East Carolina University)
Panelists will be former federal prosecutors in the Civil Rights Division’s Criminal Section of the U.S. Department of Justice
This panel explores late-twentieth century investigations and prosecutions in the Civil Rights Division’s Criminal Section, which coordinated the cases done under the Involuntary Servitude & Slavery (ISS) Program (later renamed the Human Trafficking Prosecutions Unit). Although these cases had great impact on U.S. law and policy, their impact has been “lost” within the scholarship surrounding modern anti-trafficking efforts. The panelists all served as federal prosecutors in the period leading up to the US Trafficking Victims Protection Act and the UN “Palermo” Protocol, which launched the issue of modern slavery and human trafficking into prominence.
Wednesday, April 10, 2019 - 4:30pm to 6:30pm 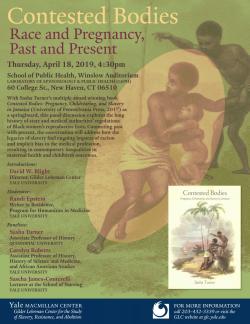 Panel Discussion: Contested Bodies: Race and Pregnancy, Past and Present

A conversation between Carolyn Roberts (Assistant Professor of History of Science & History of Medicine and of African American Studies at Yale University) and Sasha Turner (Assoc. Professor of History, Quinnipiac University) about Prof. Turner’s book, Contested Bodies: Pregnancy, Childrearing, and Slavery in Jamaica (UPenn Press, 2017). An additional scholar will address the imprint of the past on the present in terms of contemporary race-based inequalities in maternal health and childbirth outcomes.