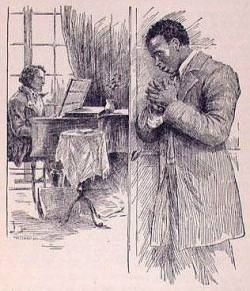 In April 1796, an anti-slavery advocate wrote a hurried letter to the New York Manumission Society, and sent it on a sloop down the Hudson from New Windsor to New York City. He had located an enslaved man named Neptune who claimed to be free, but could not speak with Neptune or his owner for fear that he would face charges for “persuading the servant away.” With great urgency, the advocate requested any advice or assistance possible to be sent on the next ship, alleging that Neptune was born of a “free womb,” and therefore free himself. The society agreed to bring a “suit” on Neptune’s behalf.

What emerged from that suit was not evidence that Neptune was born of a free womb, but instead something much more unusual. They learned that Neptune had once been enslaved by Henry White, a wealthy loyalist merchant from New York who had left the colonies for England in the wake of the Revolution, died overseas, and had left his estate, of which Neptune was a part, to his wife. Due to a New York law that emancipated the slaves of loyalist masters, therefore, Neptune should have been a free man years earlier.

Yet the widow who now owned Neptune refused to release him, and instead claimed that Henry White had given Neptune away to a son before he died, therefore making Neptune not the property of a loyalist master and validating all future sales.

We ultimately do not know of Neptune’s fate. A handwritten note on the bottom of one of the letters confidently claims that Henry White did not give Neptune away before he died, and therefore found it “a clear case” in Neptune’s favor, but the record is unclear on the actual verdict.