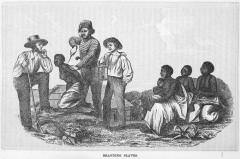 Elizabeth Brown was born into slavery near Hartford, Connecticut, in 1746, and by many accounts was evidently freed when she turned 18 in 1764. She spent more than ten years contracting her service out while living freely and independently, until during the Revolutionary War era she was “taken” by three men and sold to several successive owners. In 1797, after twenty more years of re-enslavement that took her to Albany, New York, her case finally came to the attention of the New York Manumission Society. Her advocate in the case listed several different witnesses who could attest to Elizabeth’s freedom, and ended by hoping that the society would do what they could to “attempt to aid a destitute and helpless” human being. While one hopes that Elizabeth Brown’s freedom was confirmed, no further documents exist to clarify her case.