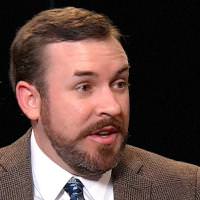 In this episode of Slavery and Its Legacies Joshua Lynn joins Thomas Thurston to discuss the antebellum Democratic Party’s effort to transform itself into a party dedicated to “preserving the white man’s republic.”

Joshua Lynn, a visiting fellow at the Center for the Study of Representative Institutions at Yale University, previously taught at the University of North Carolina at Chapel Hill, where he completed his Ph.D. Dr. Lynn studies nineteenth-century politics, culture, and political thought in the United States, with particular attention to the interaction of race, gender, and conservatism in antebellum political culture.

Josh is currently working on his second book, “The Black Douglass and the White Douglas: Embodying Race, Manhood, and Democracy in Civil War America.” It examines the long-running feud between Frederick Douglass and Stephen A. Douglas.Putting them in dialogue allows for a unique exploration of the gender and racial basis of democratic citizenship in Civil War America.

Josh has presented his research before the Society for Historians of the Early American Republic, the Society of Civil War Historians, and the Virginia Forum. Fellowships from the William L. Clements Library, the Virginia Historical Society, the UNC Center for the Study of the American South, and the Institute for Humane Studies have funded his archival research and writing.

Josh studies nineteenth-century politics, culture, and political thought in the United States. His research focuses on the intersection of political culture with constructions of race, gender, and sexuality. Josh is also guest editor of the Fall 2017 special issue of the Tennessee Historical Quarterlydedicated to reassessing Jackson’s populist legacy.